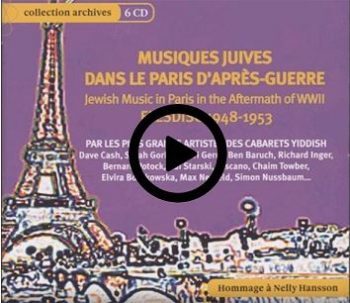 This video, made with archives deposited at the European Institute of Jewish Music, was screened at the Medem Center-Arbeter Ring, on April 22, 2017, during a conference by Hervé Roten and David Winter, grand-nephew of the singer Dave Cash.

In 2015, the Music label of the European Institute of Jewish Music released a 6 CD boxset  which gathered over 120 songs that witnessed the creative atmosphere of Jewish cabarets of after the war, where artists dared to mix folklore and samba, nostalgic tangos or satirical swings, in Yiddish, and also in Russian, Hebrew, Romanian…

Watch the conference : Yiddish music from cabarets in the aftermath of WWII

Purchase the 6 CD boxset on the online EIJM’s shop

Video : Jewish Music in Paris in the Aftermath of World War II