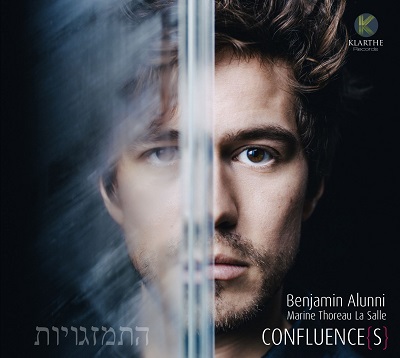 “Two red threads cross this recording. Two intertwined sons. One from France, mingling with an other one, Jewish, to weave a new reality, the shimmering chapter, with its many shades, in a century from which we thought we heard all the music.”

This program is the result of a research around an unreleased or unknown repertoire, mixing folk and traditional melodies, works of the classical repertoire and contemporary music.

All the composers present on this album, whether French or foreign, Jewish or non-Jewish, were inspired by aspects of Jewish culture. For some, music is a place of expression of their culture. For others, Jewish cultures are sources of inspiration. Sung in French, Hebrew, Aramaic or Yiddish, these melodies are due as much to famous composers as to authors, women and men, often unknown and sometimes forgotten.

From 1914 to 2009. From the Kaddish of Maurice Ravel to the one of Graciane Finzi, through Milhaud, Honegger, Barraine, Martineau and others, this program is a route chosen through the twentieth century until today. This is the first time that a program of recital of melodies woven of Jewish culture is proposed. Between tradition and modernity, Francophonie and Jewishness, these non-synagogal melodies, intended for the concert, deliver some of our History.

Supported by Arcal, Institut Alain de Rothschild, and the Foundation for the Memory of the Holocaust.

Listen to the radio broadcast dedicated to this CD