Samy Elmaghribi, whose real name was Salomon Amzallag, was born on April 19, 1922 in Safi in Morocco, a quite symbolic day, as he told to a Canadian journalist: “I was born under the sign of the singing, on th 7th day of Passover, the day when the Jewish people got out of Egypt. And, according to the Judeo-Spanish tradition, Moses sang when the Hebrews crossed the Red Sea. On the 8th day of my birth, my father invited Shikhat, women singers, to hum popular tunes near my crib.”

Salomon was the youngest of the three sons of Farha and Amram Amzallag. In 1926 the family settled in Rabat, and the young Samy quickly became fond of Arab-Andalusian music.

Some say that at the age of 7, he built himself a mandolin, with the linen threads that he picked up in his father’s clothing workshop. He learned to play the ud by himself and started to spend time with the musicians of the Jewish neighborhood of Rabat. He also sang in the synagogue and in family reunions.

When he was 14 years old, while his mother had just passed away, Samy and his family settled down in Sale. He first studied at the Alliance Israelite, and then improved his musical art in Casablanca’s Music Conservatory. And it’s finally at the age of 20, that he left his position of commercial director to dedicate himself only to singing and music. 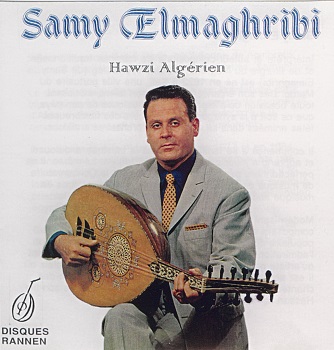 In 1948, his first hit Loukane Elmlayin (Ah, if I was a millionaire) drove him to Paris where he did his first record, on Pathé Marconi music label.

In 1950, back in Morocco, he played with his orchestra the Samy’s boys.

Salomon Amzallag, whose fame got stronger in Morocco, settled then to Casablanca and adopted his artist name Samy Elmaghribi, Samy the Maghrebian. He created his own music label, Samyphone, after having been edited for a long time by Pathé.

Between 1942 and 1964, Samy Elmaghribi wrote a song repertoire which became popular in all North Africa. Influenced by Salim Halali whom he admired the voice, he sang on one side traditional songs, in particular old qassidat by Sidi Qaddour Al ‘Alami, Cheikh Bouazza, Bensliman and other great singers of the malhun poetry. On another side, he composed a popular music with traditional influences, based on patterns from malhun or hawzi.

He did many tours, especially in Algeria, where he performed with the Symphonic Orchestra of Radio Alger.

In 1960 he immigrated to Canada. At that time, the Sephardi community of Moroccan origin got bigger in Montreal and Samy Elmaghribi became in 1967 the first cantor of the Hispanic-Portuguese synagogue Shearith Israel. He officiated there during 16 years. 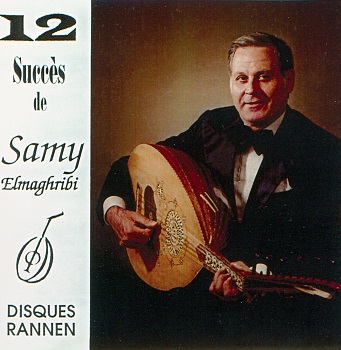 In 1984, he left Montreal for Ashdod in Israel. He created there the Merkaz Piyyout Veshira, a Sephardic music center where he taught as the educational director from 1988 to 1994, and conducted a choir of students which would later become the Israeli Andalusian Orchestra. On April 27, 2005, Samy Elmaghribi participated to a tribute concert, to his career as a singer and master. The event, which took place at the opera of Tel Aviv, also marked the 10th anniversary of the Israeli Andalusian Orchestra.

He returned to Montreal in 1996, but continued to travel the world and participated in many big musical events, such as the Festival of Gharnati Singing in Rabat and Oujda (1999) and the Arab-Andalusian Festival at the UNESCO in Paris (2000). In 2006, he was invited in the popular TV show Shada al alhan, of which the video became viral on YouTube.

In USA, he worked for a certain time as a cantor of the Beit Yosef Sephardi synagogue of New Jersey, and taught Sephardi liturgy, especially in the Yeshiva University of New York.

Samy Elmaghribi passed away on March 9, 2008 in Montreal.

A MUSICAL GENIUS
Samy Elmaghribi knew how to unite tradition and modernity, sacred and secular, Jews and Muslims. 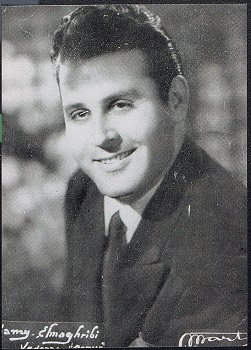 His music integrated the quintessence of the Judeo-Moroccan and Andalusian musical heritage. He had a unique musical knowledge that was also found in his perfect mastery of Hebrew and classical Arabic. He was the first man to transcribe Andalusian music. He studied its repertoire to train music lovers in the Judeo-Moroccan tradition of sung poetry, the piyutim, malhun and matrouz, the gharnati  nubas, the Moroccan mou’al, the Algerian cha’âbi and the hawzi.

He mastered and combined harmoniously four genres: popular Moroccan songs, ancient and modern, classical Andalusian singing, and liturgical chanting, to which he integrated melodies from Turkey and Central Europe.

However, contrary to his predecessors, he always applied his art by experimenting, and recorded the music in each genre forming the Judeo-Arabic-Andalusian musical repertoire. His genius lay in his ability to draw from the vast musical opus of the eleven nubas of Andalusian music each time he wanted to compose new tunes. His intimate knowledge of the 5 movements of each nuba allowed him to extract from them melodies which were easy to perform, as much in religious or secular contexts.

Thanks to his encyclopedic musical knowledge, he could easily hear the slight differences between classical Andalusian music and the gharnati genre.

Samy travelled to Algiers in the 1950’s to hear the great masters such as Dahman Ben Achoure or Reinette l’Oranaise, and to get acquainted with tonalities found only in the Algerian interpretation of the gharnati music. He would later use this non-orchestral musical form to lead services in the great synagogues of Casablanca, Paris, Jerusalem and Montreal. His performances of the Kol Nidre are known for its power and delicacy of its intonations. “Never has a Maghrebian Jew had such influence on a musical repertoire perceived mainly as the exclusive domain of the 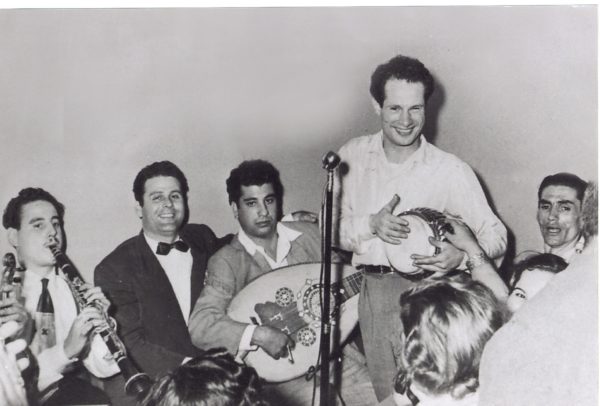 His interpretation of popular songs, the qassidat, and his songs with a style recognizable among all, have remained forever engraved in the hearts of a community scattered around the world, and even in those of the new generation which hums his tunes, even if they do not always understand the words and the meaning.

Samy succeded to unite Jews and Muslims through the love of songs, and thus contributed to the vision of peace of future time.

Listen to the playlist dedicated to Samy Elmaghribi

Browse our archives on Sammy Elmaghribi