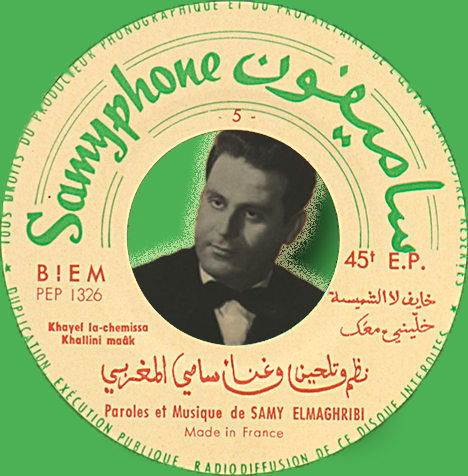 An author, composer, and singer of music inspired by the Judeo-Moroccan and Andalusian heritage, Samy Elmaghribi, whose real name was Salomon Amzallag, was born on April 19, 1922 in Safi in Morocco.

In the 1950’s, after having recorded on Pathé-Marconi music label in Paris, he returned to Morocco where he played with his band the Samy’s boys. His fame got bigger and he adopted his artist name Samy Elmaghribi (Samy the Maghrebian).

Around 1955, he created in Casablanca his own music label, Samyphone. The records were manufactured at the time in France. In the beginning of the 1960’s, the Israeli music label Zakiphon took over the pressing and distribution of a part of Samyphone’s records in Israel. By the end of the 1960’s, Pathé reedited several Samyphone records for the French market.

The video below features the greatest successes of Samy Elmaghribi, illustrated with concert excerpts, films and archive footage.

Browse the list of records published by the music label Samyphone