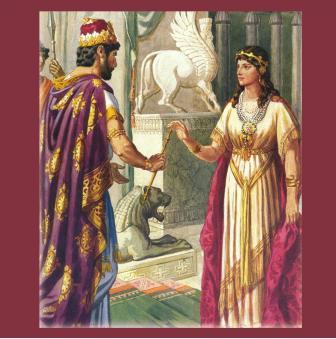 Rediscovered in 1997, the score of the oratorio Ester (1774) by the composer Cristiano Giuseppe Lidarti is to this day the longest and richest work of all Hebrew art music of the 17th and 18th centuries.

The origin of this work in Hebrew, that tells the story of the queen Esther, remains mysterious. Until not long ago, only the text of this oratorio was known, thanks to two manuscripts kept in the library of the Jewish Portuguese community of Amsterdam, and a third one, a little bit different, in the library of the Hebrew Union College in Cincinnati. But none of them had music written on it. 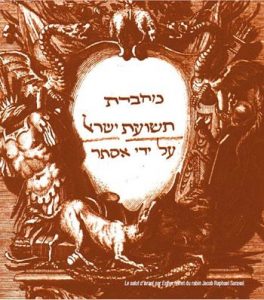 The libretto named in Hebrew The Salvation of Israel by Esther or in Italian Ester in Oratorio o Sacra Dramma, was attributed to the Rabbi of Mantua and Venice, Jacob Raphael Saraval (around 1707-1782), who was known for his interest in music. In a document dated March 1757, Saraval asked the authorities of the Mantuan ghetto, a few days before Purim, the approval for the students of his Yeshiva to present « a kind of opera based on a biblical story ». He obtained permission on the condition that no Gentile was to be admitted to the performance, with the exception of the instrumentalist and the costume designer.
Saraval’s libretto, based on the text of the second version of Haendel’s oratorio (1732), but with many cuts and some additions, remained without music until November 7, 1997, when Richard Andrewes, librarian of the Cambridge University, spots in a second-hand music book salere a written score by Cristiano Giuseppe Lidarti called Esther oratorio, 1774. 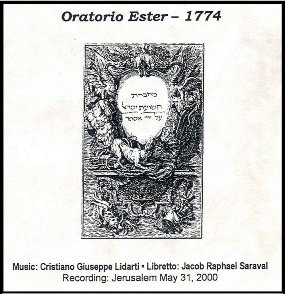 A few months later, the musicologist of Jerusalem’s Hebrew University Israël Adler, who dedicated his PhD to the art music in use in the Jewish communities of Europe in the 18th and 19th centuries, would identify Lidarti’s manuscript as the music corresponding to the rabbi Saraval’s libretto. A work of reconstitution then started, and will conclude with a world premiere of Esther’s Oratorio in May 2000 in Jerusalem, and a French premiere and its recording at the Festival de Radio France and Montpellier in 2003, with prestigious performers such as Anne Lise Sollied and Laurent Naouri.

A question is still unsolved today. Who asked Lidarti to compose new music on Saraval’s libretto? Was it David Franco Mendes, the famous historian and secretary of the community, himself a prolific poet, who apparently would have ordered the libretto to Saraval? This is an unconfirmed hypothesis. Lidarti, himself, does not tell in his autobiography, called Aneddoti musicali the existence of this work, or the professional relations that he had with Portuguese Jews from Amsterdam. One has to note that this autobiography is quite short (about 1300 words) and scarcely mentions his compositions that, according to him « are not worth of being noticed ». However his oratorio is surely not a minor work, with its imposing music or length (nearly two hours)!

Analysis of the Work 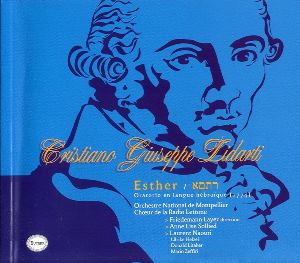 Esther’s Oratorio is composed of three acts each comprising 3 to 4 scenes. The score is written for 5 to 6 solo voices – Ester, Donna Israelita – an « Israelite woman » of her suite, Ahasveros, Mordocai, Haman and Harbona (who makes only a brief appearance), a three-part choir and an orchestra of string instruments, flutes, oboes, horns and basso continuo. It is likely that for religious reasons men performed the soprano voices. There are, in the community’s manuscripts, documents indicating that the parts designated as soprano voices were performed by male sopranists. In a formal aspect, Lidarti’s work, although dated from 1774, was created in a pre-classical style of the years 1720-1750. The overture in three movements reminds Sammartini’s symphonies and the opera overtures of Pergolese, Jomelli and Galuppi, and the orchestra is still provided with a basso continuo, a relic of Baroque practices. Arias and duets also follow the “gallant” pre-classical style; the melody is generally cyclic, the harmonies relatively simple the various parts of the piece are clearly defined with expressive contrasts.

We have here a work which is worth to rediscover. Up to today there is only one complete recording of the Oratorio, unfortunately unavailable. But Lidarti’s biography and many excerpts of his work are available on the European Institute of Jewish Music’s website. One will notice that the baroque ensemble Le Tendre Amour presents also on YouTube excerpts of this work in a colored version inspired by the Purimspiel.

Discography
Esther or The Salvation of Israel by Esther, by Cristiano Giuseppe Lidarti, Euterpe, 2003.
Libretto by the rabbi Jacob Raphael Saraval. Direction by Friedemann Layer. Interpretation by the Orchestre national de Montpellier and the Chœur de la Radio lettone.