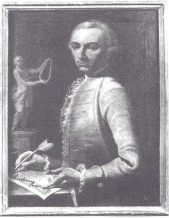 A composer born in Vienna who spent a large part of his life in Italy, Lidarti was the author of several Hebrew works, including the famous oratorio Ester, the longest and richest composition of all the Hebrew art music in the 17th and 18th centuries.

Cristiano Giuseppe Lidarti, of Italian origin, was born in Vienna in 1730. Educated by the Jesuits, he studied philosophy and law at the University of Vienna. As a child, he took harp and harpsichord lessons but did not formally study the composition, although his uncle, Giuseppe Bonno, was Kappelmeister at the Imperial Court. In order to correct a certain dilettantism his uncle advised him to study the theoreticians of traditional classical music. At the age of 21 or 22, Lidarti left for Italy with the intention of studying with Jomelli. These projects were not realized, Lidarti lived for some time in Venice and Florence, then worked as a music teacher in Cortona for five years and finally got a position as a musician (double bass / cello) in the chapel of Cavalieri di St. Stefano in Pisa, a position that he kept for nearly forty years. In the meantime he was admitted to the prestigious Accademia Filarmonica in Bologna and Modena. Lidarti, according to his own testimony, abandoned to maturity “the sublime and fugued style” that he practiced during his youth, and adopted the “simple and melodic” gallant style, developed at the time in Italy and characteristic of the preclassical period . The exact date of Lidarti’s death is not known – his last composition dates from 1793 and his name disappears from the salary list of the Cavalieri di St. Stefano chapel after February 15, 1794.

Lidarti was one of the two leading composers of the 18th century who worked for the Portuguese Jewish community in Amsterdam (the other being the Jewish composer Abraham Caceres). His name appeared for the first time in the register of the Portuguese Jewish community of Amsterdam around 1770. The known Hebrew pieces of Lidarti include the solo cantatas Bo’i be-shalom and Kol ha-neshama, the duet Ha-mesiah illemim, the choral pieces Be-fi yesharim and Nora elohim, all preserved in manuscript form at the Ets Haim’s community library and especially the Ester oratorio which remains to this day the longest and richest Hebrew work of all the art music of the 17th and 18th centuries.