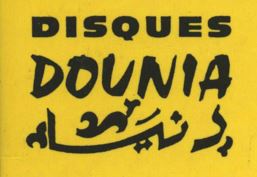 The Dounia music label is an oriental music record company that appeared in the 1930s. According to Michel Lévy, “the owners of Dounia were French counts who owned property in France (…). They had a headquarters in Algeria and another in Paris, in the district of Strasbourg Saint-Denis. During the Algerian war, Dounia, like Pathé or Teppaz, sold many records in Algeria. The business stopped when Algeria created its own currency, and when the pieds-noirs left… There was a kind of lead weight on trade between Algeria and France. It was at this point that the owners of Dounia withdrew, and proposed to El Kahlaoui Tounsi, who was the artistic director, to sell him the brand.” [1]« Michel Lévy et les trésors de la chanson judéo-arabe », Je chante Magazine n° 12, January 2016, p. 75 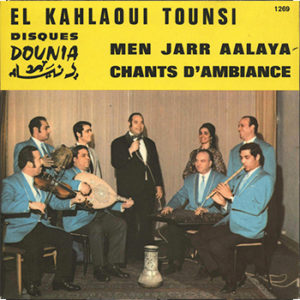 El Kahlaoui Tounsi bought the Dounia label around 1962 and produced many Jewish singers from Algeria, such as Lili Boniche, Reinette l’Oranaise, Line Monty, Blond-Blond, or from Tunisia, such as Raoul Journo, but also artists from all over the Mediterranean basin, such as the Egyptian Farid El Atrache, the Moroccan Maati Ben Kacem or even the Greek Aris San.

Still according to Michel Lévy, “in France, most Jewish artists performed mainly at family celebrations, bar mitzvahs and weddings. Line Monty, for example, sang a lot at private parties. For all these artists, galas didn’t really exist, even if there were still a few oriental cabarets in Saint-Michel or on the Faubourg Montmartre. (…) When I bought Dounia, I realised that the artists were paid in goods, that is to say in records or cassettes… It was written in black and white on 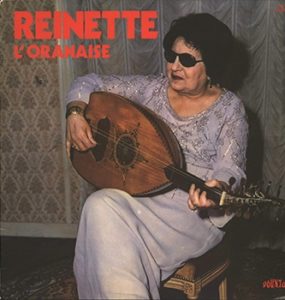 the contracts. Thus they could sell their records at the parties where they performed.”[2]« Michel Lévy et les trésors de la chanson judéo-arabe », Je chante Magazine n° 12, January 2016, pp. 75 and 77.

During the 1960s, Dounia produced hundreds of oriental, Franco-oriental or “Franco-Arabic” songs for those who were nostalgic of the lost paradise. This creative vein came to an end in the early 1970s, as the Dounia record company was hardly making any new productions, and just reissued, in vinyl or cassette, its catalogue of oriental music, which had then covered some fifteen years.

At the beginning of the 1980s, Michel Lévy, hired by El Kahlaoui Tounsi as a press attaché, relaunched the Dounia catalogue, which he bought when the latter retired in the 1990s.  Shortly afterwards, Michel Lévy published with Bruno 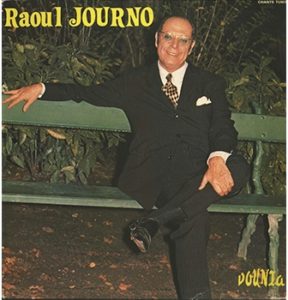 Barre, at Mélodie Distribution, several CDs by Lili Boniche, Blond-Blond, Reinette l’Oranaise, Line Monty, Luc Cherki, René Perez… in the collection “Trésors de la chanson judéo-arabe”. Some of these recordings will be reissued under licence between 2006 and 2012 by Buda Musique.

Finally, in 2013, Michel Lévy reissued several dozen songs from the Dounia catalogue on his MLP Record Company (Collection Patrimoine musical), with the publication of four CDs devoted to Jewish singers from Algeria, Tunisia, Morocco and the Middle East.

Browse our archives on the music label Dounia