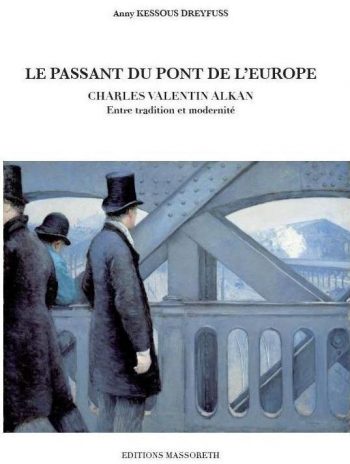 In April 1844, on the day following a successful concert where « among all the people applauding, were particularly noticed George Sand, Alexandre Dumas, Liszt, Chopin… », musical life in France is enthusiastic: « Alkan’s talent was revealed… Alkan is no more no less a genius » !
Today, Alkan can be associated to our contemporary music and thus, during the « Musica intima » festival in Liege in 2012, he was the only composer from the 19th century to be invited along with Cowell, Nancarrow, Cage ; Alkan who is recognized as « the first ” machinic “, the first post-modern ». Busoni considered him, as Chopin, Schumann, Liszt and Brahms as one of the five best composers for piano since Beethoven.

Charles Valentin Alkan (1813-1888), composer, virtuoso, pedagogue, created an interior world made of classical lectures, translations and deepening of the understanding of the Bible, as this Biblical text is for him very important. Some of his works, linked to his Jewish tradition, seem to show an exegetical approach  – which we can compared with those by Jean-Sébastien Bach – offering several levels of reading. In this 19th century where the idea of progress, including in the religious world, wants to make obsolete the message given by the tradition, Alkan will choose a « straight route, without weakness or failure », becoming, according to Le Menestrel (April 1888) « an example and a model for all who, like him, have the faith for the nice, the true, the good ». By persevering in his spiritual being, while being open to his time’s innovations and even preceding them on the pianistic field, Alkan comes closer to our actuality, and makes us remember the importance of transmission, through generations, of humanistic valors.
(Excerpt translated from the book by Anny Kessous Dreyfuss)