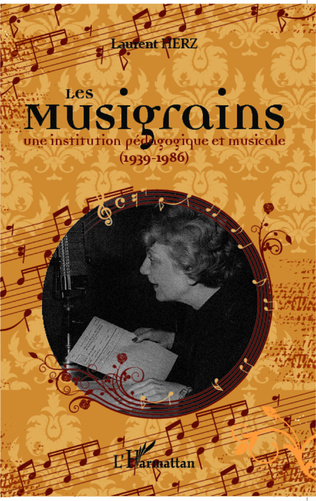 Les Musigrains is a pedagogical and musical adventure lived in Parisian theaters. Thousands of young music lovers who attended more than 400 concerts performed by hundreds of musicians, and generally inserting short contemporary works. This book presents the main facts of this institution (history, biographies, performers,…) and features testimonies of those who were close to Germaine Arbeau-Bonnefoy and her staff.

We can remind that Les Musigrains is the name of a Parisian organization of pedagogical concerts and conferences, created in July 1939 and that was active between February 1941 and May 1986. This name is in fact the name of a cycle on concerts for the schools, founded in en 1945. The organization used to be called Évolution Musicale de la Jeunesse (EMJ), a name generally given to the secondary studies, whereas a cycle for younger students was created in 1965.

Housed in the first and last years in the Conservatoire Ha&lls, of Pleyel and Gaveau concert halls, la Mutualité and le Théâtre du Châtelet, les Musigrains were most of all relate to the Théâtre des Champs-Élysées from 1949 to 1978.

The orchestra of the Société des concerts du Conservatoire, and then of the Concerts Lamoureux, was conducted by Robert Blot, conductor in Paris Opéra, replaced sometimes by Witold Dobrzynski and, after his passing away in 1983, by Michel Capelier. The production was made by Geneviève Zadoc-Kahn, piano and music teacher.

The actress Akakia-Viala, niece of Édouard Autant and Louise Lara, performed an important role in the creation of masks, costumes and in the redaction and illustration of magazines that accompanied them and developed the themes of the concerts concerts.

Hundreds of artists, beginners and advances, performed with the Musigrains, creating many musical vocations among the young people.