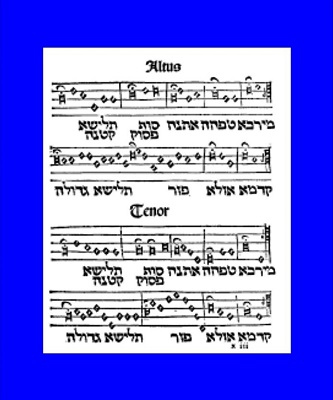 by Jean-Philippe Amar, PhD in the University of Paris IV Sorbonne

The Hebraic Bible features a cantillation on certain weekly services in the synagogues. This semi-oral tradition, os which the function is to set to light the structures of the text, is passed on since the Middle-Ages through a system of ekphonetic and melodic notation, and accents. On each word comes a simple or composed symbol which does not designate a certain height of notes but more directions. Thus, the cantillation of the Torah has known many transformations, since the origin of this system, called teamim ; its interpretation is multiple in its various Eastern and Western traditions.

This article a history of this Jewish musical notation, the various practices of its sound transcription, as well as vocal interpretation traditions.

The teamim, signs to sing the Torah