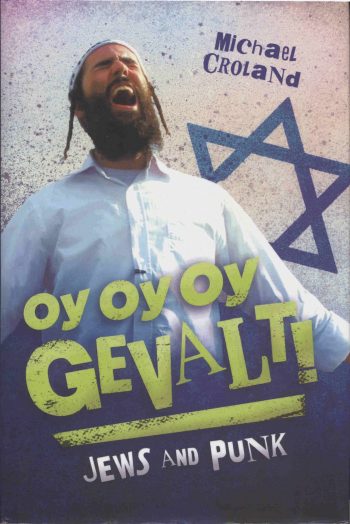 Jews and punk. Two words that can seem contradictory, and yet…

In the preface of his book Oy oy oy gevalt ! Jews and Punk, Michael Croland shows the similarities of these two worlds through this simple word “oy/oi”. The first “oy” is a common Yiddish word that roughly translates to « oh ! ». It expresses dismay or disbelief, sometimes sarcastically. It can be used on its own and in such sayings as « oy vey », « oy gevalt », « oy oy oy ». The second “oi” is a punk slogan rooted in the British working class and heard at soccer games in the United Kingdom. It became associated with skinhead bands in the late 1970’s, sometimes with racist and anti-Semitic overtones.
The music called “Oi” has become a sub-genre of punk rock, that often has choruses doing « Oi ! Oi ! Oi ! », and that can be heard today in a variety of punk rock acts, wether they are racist or anti-fascist.

After digging through articles, websites, and old cassette tapes, Michael Croland compiled this absorbing ethnography of Jews in punk music, or expressing a punk attitude (non-conventional, rebel, outsiders…) through their art (music, video, zines…). He writes about these artists who claim their double identity, Jewish and punk: from the pioneer band The Ramones – including two Jews and two non-Jews, and which the opening track of their first album is called « Blitzkrieg Bop » – to Moshiach Oi !, Daniel Kahn, The Dictators, The Clash, NOFX, Schmeckel, Yidcore, Golem, and Steve Lieberman, aka « Gangsta Rabbi ».

Yishai Romanoff, the Jewish orthodox and lead singer of the punk rock band Moshiach Oi ! explains, for example, that his song « Avraham was a Punk Rocker » can be an anthem for Jewish punk : « Born into a society of lies – As a young man he came to realize – That everything around him was deceptive vanity – Avraham was the first one to break free – Avraham was a punk rocker – Smashing all the idols, yea, he never could be conquered – Thrown into the fire for daring to resist – Giving us a reason to exist…»

Through many anecdotes and interviews, the followers of this strange sect show us that they found an understanding environment, after having felt outsiders or excluded from their communities, wehther it’s a punk or a Jewish community.