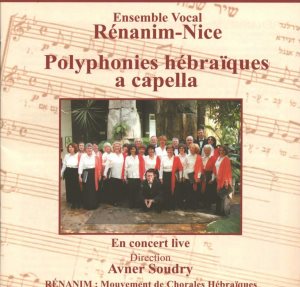 Live concert recorded in 2006 in Nice, under the direction of Avner Soudry

Renanim (plural of the Hebrew word “renana”, joyous song) is the name of this young movement of Hebrew choirs created in 1998 by Avner Soudry.

Rénanim has several goals :
– The formation of amateur Hebrew choirs, linked to each other through a European movement.
– Interfaith meetings between chorists and friends.
– Mutual invitations of choirs from Israel and abroad.
– The creation of an artistic base for a Hebrew popular and social activity.

Rénanim helps the art of Hebrew choirs go further and the promotion of the Hebrew musical heritage of former and today’s Jewish communities in the world. 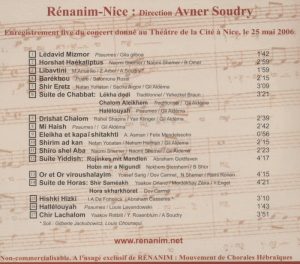