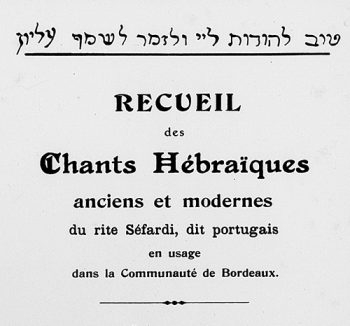 This compilation of musical scores of 1‎4‎6 pages was compiled and annotated in May 1928 by Salomon Foy, chief conductor of the Choir of the Israelite Temple of Bordeaux, under the initiative of the great Rabbi of Bordeaux, Joseph Cohen and edited by the Israeli consistoire of Gironde region.

It is a compilation of musical scores of the shabbat services and the holidays services, a monument of Sefardi religious music.
Salomon Foy annotated in particular all the ancient tunes according to the Portuguese tradition which was used for over a century in the community of Bordeaux.

At the end of this compilation, we find less known melodies of today’s generation, the Bacachot which are liturgical chants recited before the morning prayer.

Discover an excerpt of this compilation :

Look at the study and application handbook of Hebraic liturgy in the Sefardi-Portuguese ritual, recorded and compiled by Gilbert Léon