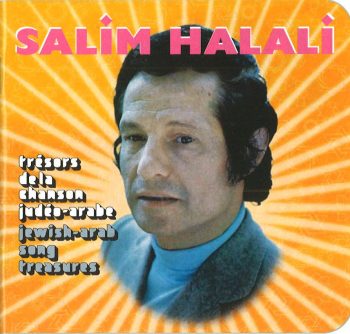 A new CD in the collection “Treasures of Judeo-Arabic songs” published by Buda Musique, the marvelous voice of Salim Halali, born in 1920 in Annaba (Ex-Bône) in Algeria, testifies of Judeo-North African songs from the 1940’s until 1965.

Salim Halali was one of the finest voices of North African songs, in all musical genres. Today, even the new generation sings some of his songs, made known in particular by the Orchestre National de Barbès (Dour Biha Ya Chibani) or La Mano Negra (Sidi H’bibi), while not knowing who the original singer was.

When he began, Salim, born on July 30, 1920 in Annaba (ex-Bône) into a Jewish Berber family of bakers, dreamt of career as a Spanish singer. When he arrived in Paris in 1934, after a stop in Marseille, he began a “sevillana” repertoire, particularly marked by the hits of the French-Italian singer Rina Ketty, singer of “J’attendrai”. His beautiful voice is not unnoticed. He then decided to work on the North-African repertoire. His new vocation starts very strongly in the biggest theatre of Marseille, and continues in other cities in France.

Salim almost got caught in the horrors of Nazism, but was saved thanks to the rector of the Mosque of Paris. When the war was finished, Salim comes back to music and, once again, his beautiful voice, his performance on stage and his playing of the darbuka  please the audience, and puts on fire the Oriental dance clubs. A rich man (he was the singer that sold the most albums of North-African songs, and requests to entertain weddings of the richest people of the Arabic world), he purchased, in 1947, the Parisian hotel of Ferdinand de Lesseps, avenue Montaigne, which he transformed into a luxurious night club called « Ismaïlia Folies », and the next year, he opened « Le Sérail ». That impetus would be stopped by the death of his brothers and sisters.

Disgusted and scarred, he found refuge in Morocco where he was warmly welcomed. He would live there the rest of his life, long years of happiness between album recordings and live concerts until 1965, the year of his retirement. In poorly known circumstances, he lost all his estate, and ended his life in deprivation,

Are left behind his songs and voice that we will never forget.