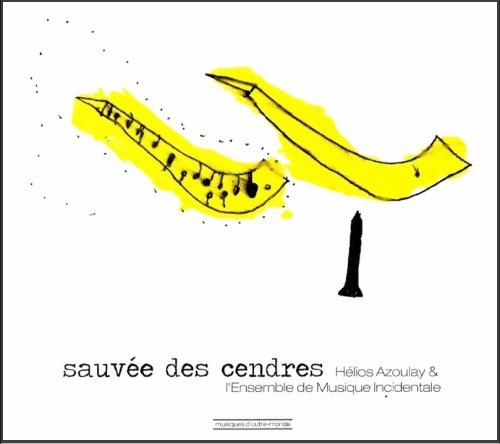 The musician Hélios Azoulay, expert and reknowned performer of the music in the concentration camps, just released a CD called Sauvée des cendres (saved from the ashes), refeering to an unfinished opera by Viktor Ullmann (1898-1944). On October 17th 1944, the Austrian composer is killed in Auschwitz. He had just finished writing the libretto of an opera dedicated to Jeanne d’Arc: Le 30 mai 1431. Written in the ghetto of Terezin, this opera depicts the famous moments of Jeanne d’Arc’s life until her death on the pyre. This unreleased work has been recovered, translated and published for the first time by the composer Hélios Azoulay in his book L’enfer aussi a son orchestre (hell also has its orchestra).

Although Ullmann’s libretto is a poetic chef-d’oeuvre, it has unfortunately no music: he scribbled only two pages for piano, included in another musical score: Don Quixote tanzt Fandango (1944). Hélios Azoulay decides therefore to complete this opera dedicated to Jeanne d’Arc, who is often compared to Deborah the Prophetess, who died burnt on the pyre for trying to save her people. But he did not want to compose in Ullmann’s style. He spreads and transforms the few precious notes already written in a sort of melodic ostinato which upholds the text. Because he doesn’t want to compose an opera, the text is more important and must be heard! This creation is therefore written for a reciter, a woman’s voice, a string quartet and a piano.
The result is captivating. The music is like hanging on the singer’s lips, Marielle Rubens.

Order the CD.
Look at the interview of Hélios Azoulay on Akadem (in French).