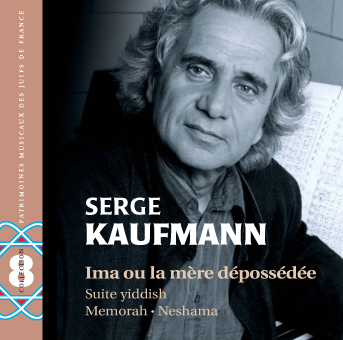 Is it possible to write Jewish music without using one traditional theme? This is the bet taken, and won, by Serge Kaufmann, who gives us with this CD a work colored with strong Jewish accents.

A composer, journalist, producer for radio and television and filmmaker, Serge Kaufmann holds a unique place in music. Born in Switzerland in 1930, with a Protestant mother and a Jewish father, Serge Kaufmann chose France as his homeland after the 2nd world war. He thus visualizes a picture – the little boy from Warsaw’s ghetto – that makes him question himself: “what would have happened to me if I was born not in Switzerland, but on the other side of the border? Would I have shared the fate of all these thousands of children that did not have the chance to grow up, just because their parents or grand-parents were Jewish?!”

Inspired by this revelation, Serge Kaufmann has enriched the field of Jewish music for nearly 25 years by composing works with evocative names: Yiddish Suite, Little Klezmer Suite, The Rothenbourg Maharam, Neshama, Kol nidré, Yesod… Although never built on purely traditional melodies, his compositions have a sound that is undeniably Jewish.

This 8th volume from the collection Patrimoines musicaux des Juifs de France, edited by the Foundation of French Judaism, presents four essential works by serge Kaufmann : first of all, the Yiddish Suite, in an intimate version for cello and guitar, then, for the first time on CD, the string trio Memorah, the beautiful Neshama for solo cello, and finally the cantata Ima ou la mère dépossédée, a shriek of pain expressing the quintessence of the composer’s musical art. 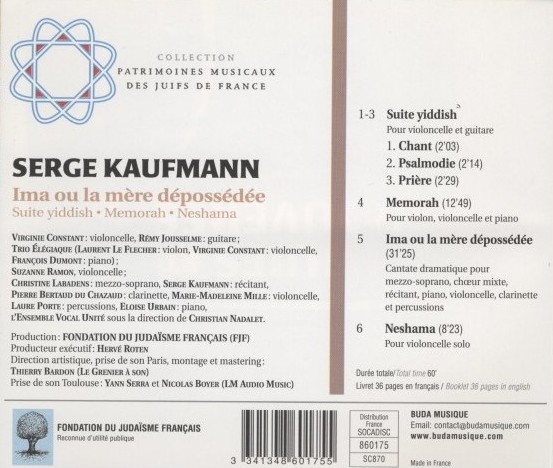