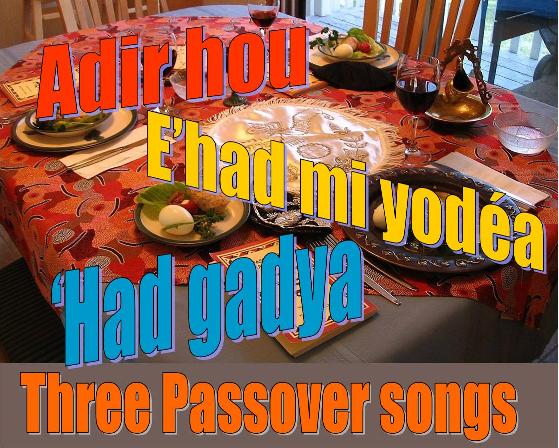 Since at least the 15th century, it has become a habit to end the Seder, the meal during Passover evening, with three songs that we sing in Hebrew (or Aramaic) and in the specific Jewish language of each country (Yiddish, Judeo-Arab, Judeo-Spanish…). These traditional cumulative songs celebrate God’s sovereignty and goodness.

Freddy Raphaël and Robert Weyl mention in their article Regards nouveaux sur les Juifs d’Alsace[1]Freddy Raphael and Robert Weyl, Regards nouveaux sur les Juifs d’Alsace, Ed. des dernières nouvelles d’Alsace, Strasbourg, 1980, 311 p., it seems « vain to search the precise sources of these songs, that necessarily fall within the cultural trend of populations, among which Jewish communities have settled. We bonded, quite rightly, Chad Gadia, the kid song, with enumerative German and French songs of the 12th and 13th centuries. »
According to Léopold Zunz [2]Leopold Zunz, Die gottesdienstlichen Vorträge der Juden, Berlin, 1832, p. 126., mentioned in Freddy Raphael and Robert Weyl’s article, the three Passover songs, Adir hu, Echad mi yodea and Chad gadya, would have entered the Ashkenazic tradition of Passover since the 16th century, before spreading in every Jewish community.

ADIR HU
For Freddy Raphaël and Robert Weyl [3]Freddy Raphael et Robert Weyl, op. cit.: « Adir Hu is a Hebraic hymn written to appear as an acrostic version of the Hebrew letters. We already find it in its Judeo-German version, in a manuscript of the 15th century [4]Yosef ‘Hayim Yerushalmi, Haggadah and History, Planche 37, Philadelphia, 1975. That song was printed for the first time at the end of a Haggadah from Prague in 1526, then in one from Mantua. It was also used in a Judeo-Italian edition of the Haggadah published in Venice in 1609. The Jews from Avignon in France sang that hymn during every important celebration, without any preference for Passover (…) »

ECHAD MI YODEA – the number song
Still according to Freddy Raphaël and Robert Weyl[5]Freddy Raphael et Robert Weyl, op. cit. : « The poem Echad mi yodea is written in Hebrew and features a few words in Aramaic. A manuscript of 1406 informs that it was written on a parchment in Rabbi Eleazar ben Kalonymos’ synagogue in Worms. The latter was born in Mainz around 1176 and died in Worms in 1238; he was a brilliant Talmudist and Cabbalist. One of his most important works, called Ha-Rokeach, is at the same time halachic and ethical.

and so forth. The last verse is:

Who knows thirteen? I know thirteen. Thirteen are God’s principles; Twelve are the tribes of Israel; Eleven are the stars of Joseph’s dream; Ten are the Commandments; Nine are the months of childbirth; Eight are the days before circumcision; Seven are the days of the week;
Six are the sections of the Mishnah; Five are the books of the Torah; Four are the Matriarchs;
Three are the Patriarchs; Two are the tablets of the covenant; One is our God, in heaven and on earth.

CHAD GADYA – the kid song
Last of the three songs ending the Passover seder, according to Freddy Raphaël and Robert Weyl [6]Ibid., idem. : « Chad gadya, the kid song, entered the printed version of the Haggadah of Prague only in 1590 and does not appear in the previous edition of 1526.

An only kid! An only kid
My father bought for two zuzim
Chad gadya, Chad gadya. (Chorus)

Then came the cat and ate the kid
My father bought For two zuzim.
Chad gadya, Chad gadya.

Then came the dog, that bit the cat, that ate the kid…

The ninth stanza, the last one, recalls every stanza :

Then came the Holy One, blest be He!And destroyed the angel of death, that slew the butcher, that killed the ox, that drank the water that quenched the fire, that burned the stick, that beat the dog, that bit the cat, that ate the kid my father bought for two zuzim, Chad gadya, Chad gadya.

Just like Echad mi yodea, the manuscript of 1406 tells us that this text was presented in Rabbi Eleazar ben Jehuda ben Kalonymos’ synagogue in Worms. The study of an ashkenazi haggadah in the Sereni collection, dating from the 15th century and which features both an Aramaic version and a Judeo-German version of Chad gadya, allows Ch. Szmeruk [7]In W. Weinrich, The Field of Yddisch, New York, 1954, pp. 214-218. dating it to the end of that century, the kid song had entered the Passover recitation. E.D. Goldschmidt speaks of the Gaon ‘Hida (Haym Joseph David Azoulay)’s position, a cabalist and halachist (policy maker) of Jerusalem, who of Jews from the Ottoman Empire and from Italy considered in the 18th century to be the greatest wise man of the time. He denounces one of his pupils who mocks the Ashkenazi Jews who recite Chad gadya ; he promotes the teaching of Rabbi Isaac Louria of Safed to celebrate the deep wisdom of those poems ; he reminds us that the Torah “giants” make about them, in every generation, a base of countless commentaries.

Although the subject of Chad gadya is found in many legends of Western and Eastern foklore, from Kabylia to Thailand and India, it seems that its origin is a German folk song, Der Bauer schickt den Jockel aus : the master sends his valet to cut oat, but the latter prefers to stay home; the master sends then the dog to bite the valet, the stick to hit the dog, fire to burn the stick, water to shut the fire out, the cow to drink the water, the butcher to kill the cow, … And will also appear a bird of prey, a witch, a headsman and a doctor…

In Switzerland, the song tells the story of a simpleton sent to pick pears : Joggeli sott go Birreli schüttle. K. Kohler [8]K. Kohler, Sage und Sang im Spiel Jüdischen Lebens, in Zeitschrift für die Geschichte der Juden in Deutschland, T.3, Braunschweig, 1889, pp. 234-241. speaks of an Alsacian song built on the same model : S’schemol e Frau g’sinn. Die hat e Schnirrchele g’hat : once upon a time there was a women who had a piglet, that got killed by the dog ; the dog got hit by the stick; the stick was burnt by the fire, shut out by water, that the cow drank, that the butcher killed, that the headsman killed.

From the Rhine valley, the kid song spread in Venice and Amsterdam in its Aramaic version, sprinkled with Hebrew words ; in the South of France, it is translated into regional dialects [9]G. Paris, in Romania, t. 1 n° 4, octobre 1872, p. 223. ; in North Africa, while the native families of Spain sing it in Ladino, the Jews from villages and oases before the Sahara desert recite it in Arabic.