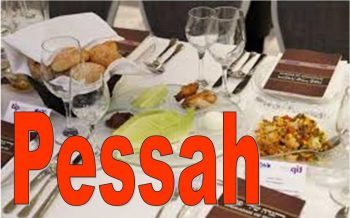 Passover (Pessah) – פֶּסַח – is one of the three pilgrimage festivals of the Jewish calendar (with Shavuot and Sukkot), in which we commemorate the Hebrews who got out of Egypt. Highly symbolic and joyous holiday, it is celebrated with music in all the Jewish communities, from the 1st evening of Passover with the ritual meal of the Seder, until the 8th day with the Moroccan tradition of the mimouna.

The Seder is the ritual meal of Passover during which we read the Haggadah (story telling the events that led the Hebrews to leave Egypt). It is celebrated one evening in Israel, two evenings in a row in diaspora (the 2nd night was established in the post-exile period, to allow the Jewish people, spread through the Levant, to respect the time defined by the Torah, based on a lunar cycle). 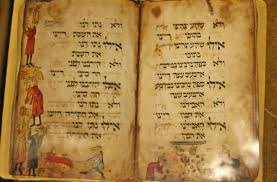 The holiday begins on the 15th of Nissan at dusk, and lasts seven days (eight in diaspora) and only the first and last days are completely non-working days. Particularly rich with rituals and customs, it was originally distinguished with the Passover sacrifice, now impossible since the destruction of the Temple. The obligation to eat matzot (unleavened food) and to ban chametz (leavened food) is still applied during the full holiday.

The meaning of the Passover holiday

Passover is a holiday with a lot of meanings. All year long, we mention the exodus from Egypt, during Shabbat, during Kiddush (sanctification of the holy day with a prayer on a kosher wine glass) or when we put the Tefillin, (small cubicle boxes). Passover is a serious holiday because it represents the first real celebration lived by the people of Israel, established for the first time since its exile from Egypt, as « the Jewish people ». Furthermore, it is an agricultural celebration, with the starting of the barley harvest, which inaugurates the yearly cycle of crops.

During the Seder, which etymologically means « order », « program » in reference to the reading of the Haggadah, there is a very strong cohesion between the guests, and an intergenerational dimension. The idea of the celebration is to put oneself back in the conditions, the state of mind of that time of exile, by giving grace to God for his mercy (sung canticles). In Yemen or Iraq for example, men disguise themselves as nomads and perform the exile from Egypt with a stick in the hand and a matza, laid on their shoulders in a cloth. 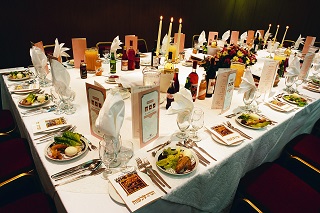 The officiating person starts by blessing this day by doing a Kiddush (prayer with the first cup of wine of the Seder which will count 4 in total), washes his hands, dips a green vegetable in salt water, breaks one matza and puts aside one of the two halves for the Afikoman (half of a matza set aside, in the tradition, for the child which will hide it for the end of the Seder). The ceremony proceeds following the reading of the Haggadah. In the song Ma nishtana, the youngest among the guests, asks four ritual questions, about the reasons this night is different from the other nights. These questions are : why is this night different from all the other nights ? Why do we eat only matza ? Why do we eat bitter herbs ? Why do we all have to eat in a leaning position tonight ? In the tradition, Ma nishtana is thus the song starting the celebration.

Beginning of the Seder – Rite from Algiers – Sample 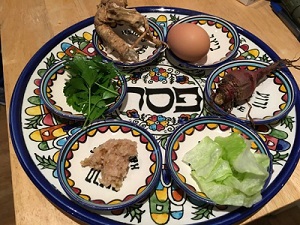 According to the ritual, three matzot (unleavened bread) one on top of the other, each one covered seperately, are placed on a plate with other symbolic ingredients : Karpass, or bitter herbs (celery, parsley) ; salt water to remind the taste of the children of Israel’s tears during slavery ; Maror, bitter herbs, to remind the bitterness of life in Egypt (lettuce, endives, horseraddish…) ; Harosset, a mixture of dates, nuts, apples, almonds, cinnamon and wine, symbolic of the mortar used by the Hebrew slaves to make the bricks ; Zerowaʿ : a bone to remind the sacrifice of the pascal lamb at the time of Jerusalem’s Temple ; Bēṣa : a hard-boiled egg, in memory of the destruction of Jerusalem’s Temple.

We notice cultural differences, mainly in the first part of the reading of the Haggadah, especially through their different manuscript and printed versions, reflecting a great creativity, that we notice also in music. Each tradition has its own piyyut (religious poem), his own tune, due to the fact that each communuity seeks to captivate his audience in order to mark that celebration. These differences are also culinary, especially with the various possible combinations of the recipe of the Harosset found on the Seder plate, that we see in various traditions. The Yemenites do not use any Keara (Passover plate) : each guest gets a plate with the various ingredients and the Seder table is covered with Maror leaves. Several clothing customs have also been established in various communities : a white cloth, like the great priest on Yom Kippur for the Ashkenazi, a djellaba in North Africa communities, for « freedom clothes ». In Morocco, there is a tradition of passing the Seder plate over the guests heads, to get the attention of children and adults, and to symbolize also the protecting divine presence that spared the death of the Hebrew first borns « passing over » their houses, mentioned in the tenth Egypt plague of the Haggadah.

Still in order to interest, involve and raise questioning among the people present around the Passover Seder table in various communities, it is custom for those who do not understand Hebrew or Aramaic to introduce the daily used language, the Jewish languages, such as Judeo-Arab, Judeo-Spanish or Yiddish. Among certain Yemenite families, the youngest child sings Ma nishtana in Arabic and receives a soft boiled egg ! Finally, during the last part of the reading of the Haggadah when everyone recites Dayenou (an other song during the Seder which means « it would have been enough »), the whole table is lifted, each time this word is pronounced.

After the questions of Ma nishtana, starts the recitation – the Maggid – of the exile from Egypt, with especially the prayers Baruch hamakom and Vehi sheamda. Baruch hamakom is a prayer to God, in its unmovable dimension. Whoever we are, whatever is our character, God is here to make understand to everyone the meaning of this holiday and invites to recognize the divine dimension, as requested to Pharao in Egypt during biblical times. Also in the song Dayenou, (which means it would have been enough), sung at the end of the Seder, the idea is : whatever happens, God orchestrated it and allowed this exile from Egypt.

The prayer Vehi Sheamda in which we speak to God during Passover, echoes all the persecutions endured by the Jewish people, and the meaning of this prayer may to always be capable of overcoming the difficulties such as slavery in Egypt. Another important prayer of the Seder is Hallel, a compilation of texts composed of 6 psalms (113-118), praising God for all the miracles accomplished. The Hallel is generally sung aloud by the entire community for the three pilgrimage festivals (Pessah, Shavuot et Sukkot) as well as during morning service, after the Amidah (prayers occupying a central place in Jewish religious services).

All these lively songs have the purpose of getting the attention at the end of the Seder, until the time of the actual meal where dishes and customs vary, as we saw, for each community. Gefilte fish or Kneidlers for some, Msouki (mixture of vegetables and meat and matzot) Fad (mixture of heart, liver…) or matza-soup for others… The end of the meal ends traditionally with 3 songs, adapted and sung in all traditions. These songs are Adir hu, Chad gadia or the kid (a cumulative song) and Echad mi yodea. The song Chad gadia was sung in Italian by Angelo Branduardi with the title A la foire de l’Est, symbolic of the great capacity of adaptation of Jewish music into its environment.

Article written with the help of the radio show : Music from Passover seder – journey into the musical traditions of Passover.

Listen to the playlist Chad gadya