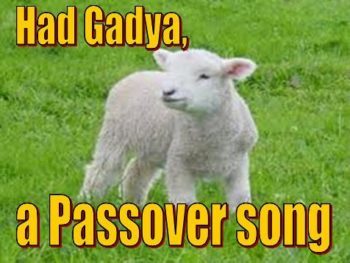 Chad gadya (the goat), the famous Passover song sung in all (or almost !) Jewish traditions

Last of the three Seder songs of Passover, Chad gadya is a cumulative song (each verse recalls the one before) which puts in parallel the fate of an innocent baby goat and the fate of the Jewish people. According to a traditional Jewish teaching, the kid represents the Jewish people that God (the father) received through Moses and Aron (the two silver coins). The successive persecutors would be Assyria (the cat), Babylone (the dog), Persia (the stick), Macedonia (fire), Rome (water), Saracens (the cow), and the Crusaders (the butcher). Turcs, who occupied the Holy Ground until 1917, would be represented by the Angel of Death, the story ending with the return of the Jews in Israel with the help of divine grace.