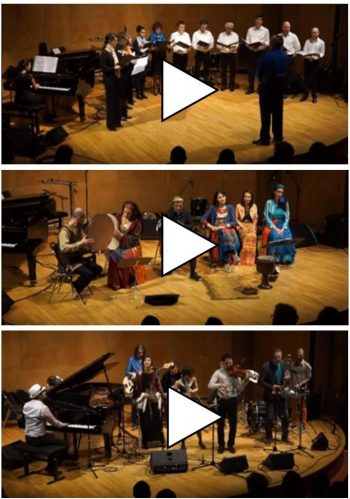 Watch video clips of the second edition of the European Institute of Jewish Music’s Gala Concert, “Jewish music in all its states”, which took place on Sunday November 6th, 2016, Cortot Hall (Paris), with the support of the Henriette Halphen Foundation, under the aegis of the Fondation du Judaïsme Français.

The second edition of of the European Institute of Jewish Music’s Gala Concert was attended by nearly 400 spectators.

In the program: Jewish liturgy from 17th century to 20th century, Sefarad melodies and Bulgarian polyphonies, and finally, Klezmer music and Cuban salsa.

The first part of the concert was composed of two very different parts.
First of all, the choir of the Paris synagogue Kehilat Gesher, a choir created in 2003 under the impulse of hazanit Janet Pape, and led since 2009 by Thomas MacFarlane, performed Jewish liturgical repertoire from the 17th to 20th centuries, such as the psalms Adonai Ro’I Lo Echsar by Gerald Cohen (1960); Elohim Hashivenou by Salomone Rossi (1570 -1630), or Enosh by Louis Lewandowski (1821-1894).

Then, the Balkanes Quatuor, accompanied by David Bruley (percussions) and Edmond Ghrenassia (clarinet) invited us into a surprising universe of sefardi melodies mixed with Bulgarian polyphonies, performing a repertoire based on Judeo-Spanish songs, onto which were connected traditional Bulgarian songs. That interaction between the Sefardi and Bulgarian cultures offered us a renewed vision of Judeo-Spanish singing.

In the second part of the concert, Los Cigarillos en el Shtruddle, directed by David el Shatran, is the first band who dears to try the explosive experience of blending latin music and klezmer. Playing on the similarities of their rhythms, David el Shatran who is also the pianist and arranger, led us into a “Shtetlito Cubanele” dance where gefilte fish, caught in Latin America is cooked in hot salsa with horseradish!