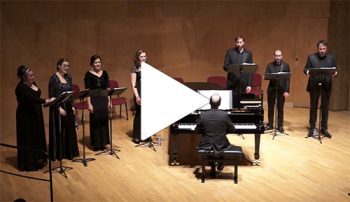 Watch video excerpts of the fifth edition of the European Institute of Jewish Music’s gala concert, which took place on November 17th, 2019, at the Cortot Hall (Paris), with the support of the Henriette Halphen Foundation, under the aegis of the Fondation du Judaïsme Français.

Program: From the synagogue to the opera – Jacques Offenbach and friends, performed by the Ensemble La Truite Lyrique, conducted by Hector Sabo.

Few music lovers know that Jacques Offenbach (1819-1880) took parts of his musical inspiration from the synagogal chants that he learned in his childhood, from his father Isaac Offenbach, musician, composer and cantor in Cologne’s synagogue, in Germany. Since his arrival in Paris in 1833, and all throughout his career, Jacques Offenbach would work with other music composers of Jewish origin who, like him, would move with an incredible ease between the synagogue and the opera stage, from light music to synagogal chants, thus abolishing borders between genres, within the splendor of 19th century Paris.

Download the program of the IEMJ Gala Concert 2019 (in French)