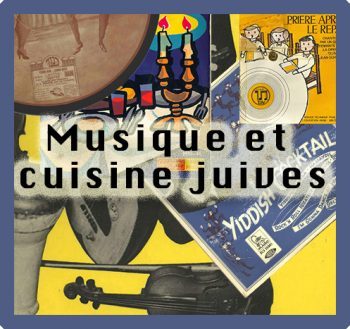 VIDEO PRODUCTION FROM THE EIJM

Three short funny movies produced by the EIJM and screened during a conference hosted by Hervé Roten in the Cercle Bernard Lazare (Paris) on the subject of “Jewish cuisine and music” in the Yiddish, Judeo-Spanish and Oriental traditions

Jewish cuisine is a language in itself. Substratum of the Jewish mother, it feeds the children of their traumas and roots them into their Jewish identity. All these dishes we loved or hated, we speak of them with fervor, after our 40 years. Our mother’s borekas, her marvelous chopped liver, her delicious couscous, all of them bring us back to a blessed childhood when life was simple : either we ate what was in front of us, either we were responsible for the immediate death of our mother ! But Jewish cuisine isn’t only guilt, it is also pleasure of the mouth. So much that many artists sing it with humor and nostalgia, as one can see in the following videos…