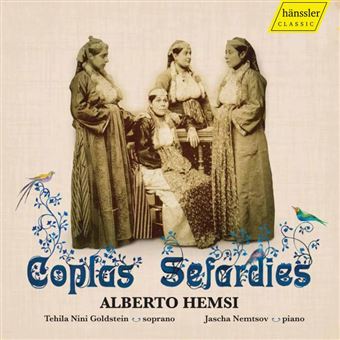 The catalogue of the recorded works of Alberto Hemsi (1898-1975) gets bigger with the release of a new 3 CD box set published by Hänsser Classic, on September 30, 2020. The soprano singer Tehila Nini Goldstein and the pianist Jascha Nemtsov perform all 60 Judeo-Spanish songs (Coplas Sefardies) published in 10 collections, between 1932 and 1973, by Hemsi. Recorded between 2017 and 2020, this edition, which wants to appear as complete (all verses are sung in their original tone), includes two other compositions by Hemsi : Hamicha chirim (Five Hebrew Songs), op. 25, written in 1947, dedicated to Bracha Zefira, and published in Florence in 1948, and Yom g(u)ila yavo, yavo ! (Hebrew sketch) op. 17, published in Alexandria in 1934.

The Coplas Sefardies are a collection of Judeo-Spanish songs for voice and piano, composed by Alberto Hemsi from 230 poems and tunes collected in the Sefardi communities of the former Ottoman Empire between 1923 and 1937. From this vast corpus, Hemsi retained 60 traditional melodies in which he composed piano parts « of which the carrying out turned out to be quite complicated, because it wasn’t simply a question of ‘accompanying’ the songs, but of encapsulating them into little symphonic tableaux, in order to suggest, as much as possible, the atmosphere, the spiritual state of mind, the subject and the melody ». The Coplas Sefardies by Alberto Hemsi, with Iberian and Oriental accents, offer a renewed vision ot the Judeo-Spanish oral tradition in the spirit of Western Art music of the beginning of the 20th century.

This new recording of the Coplas Sefardies completes an already long list of publications dedicated to the masterwork of Alberto Hemsi, performed by Amparito Péris de Prulière (in the 1960’s ?), Mira Zakai (1988), Pedro Aledo (2005) or Assaf Levitin (2018-2019)…

For more than 3 hours, Jasha Nemtsov’s piano accompanies with delight and virtuosity the powerful and lyrical voice of the soprano singer Tehila Nini Goldstein, in a repertoire which blends the main genres of Judeo-Spanish poetry : romances (medieval ballads), cantigas (songs of the daily life) and coplas (songs based on Hebrew religious forms, such as the 2 Passover songs Un cabretico and the numbers song Quen supiense y entendiense). Written by Jasha Nemtsov, the 104 page booklet that comes with the CD box set is quite remarkable. Besides Alberto Hemsi’s biography, it includes all the texts of the songs as well as their translation in English.

A CD box set you can listen to all year long…