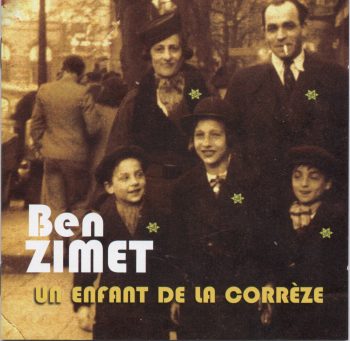 The CD of the last public appearance show by Ben Zimet with the Yiddish Quartet traces the childhood of the singer during and after the war, and maintains the memory of those who disappeared. The aim was to make young people today sensitive to the past, and to encourage better relationships between religions.

“There is first this song : ’J’attendrai’ (I will wait) by Rina Ketty who, 70 years later, still enchants my memory. Then, the cannon shots, the brutal exile, the long travel to the free zone, the survival from all dangers. The exile again, in Corrèze this time, when the Germans invaded the free zone.

Finally, the morbid game of hide and seek with French authorities and the hidden children. Then, the liberation, the great relief, the sadness of the Holocaust, the exile in Canada, and the trip back to Paris with a blossoming love, as if the world had started dreaming… 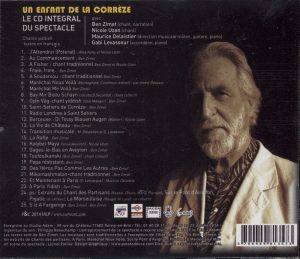 And this show, this ‘Enfant de la Corrèze’ which crowns all those years of singing our disappeared poets, our wives, children, grand_parents, gased, burned, our language, saved, maybe…”

To purchase the disc: Mlp Music

Listen to the radio broadcast Ben Zimet – From shadow to light