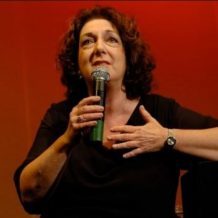 Tribute to a great performer and teacher of Yiddish songs

Adrienne Khana Cooper (September 1, 1946 – December 25, 2011) was a singer – one of the great Yiddish performer’s of our time – and an activist. She played a major role in the renewal of klezmer music with her influence on the teaching of Yiddish songs.

She co-founded Klezkamp and was member of the organization’s bureau “Jews for Racial and Economic Justice” (JFREJ) until summer 2011, when she was diagnosed with a cancer that took her away on December 25, 2011.

Her daughter, Sarah Gordon, is a singer, in particular with her band “Yiddish Princess”.

Listen (excerpt) :
Adrienne Cooper performs “Dem Fideles Neshome” (the soul of the little fidl), on the album Vaserl published by Yugntruf in 1978 to present new Yiddish songs from the young generation. The song is composed by Josh Waletzky with a poem by Shike Driz.