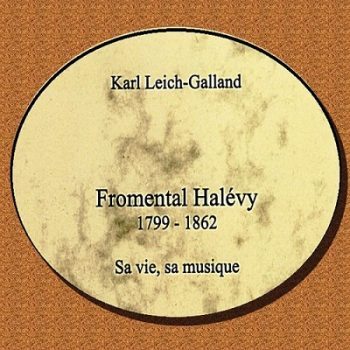 Since the early 1980s, the musicologist Karl Leich-Galland has been working on the rediscovery of the French Romantic repertoire of the 19th century through the publication of scores, booklets, out-of-print works and press kits. In particular, he was the initiator of a colloquium devoted to Fromental Halévy (1799 – 1862), on the occasion of the revival of his famous opera La Juive, at the Opéra Bastille (Paris) in February 2007. This book Fromental Halévy (1799 – 1862) – Sa vie, sa musique, published in 2020 by Musik-Edition Lucie Galland, offers us an in-depth synthesis of his research on the life and work of Fromental Halévy, this Jewish composer considered in his time, along with Daniel-François-Esprit Auber (1842-1871), as one of the masters of the French school of music. 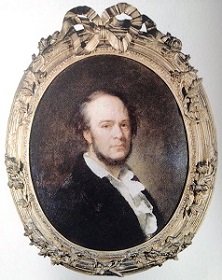 Born into a Jewish family from Bavaria by his father and from Lorraine by his mother[1]Elijah Halphen Levy, son of a rabbi, was originally from Fürth, Bavaria. He arrived in France at the time of the Revolution to obtain civil rights, settled in Paris around 1790, was a chorister in … Lire la suite, Fromental Halévy presents the very profile of a French Jewish musician, heir to the ideals of the Revolution, grateful to France for offering his people emancipation, and faithful to the faith of his fathers. Although his father Élie Halévy, son of a rabbi, was a chorister in several synagogues and then secretary of the Jewish Consistory in Paris, Fromental Halévy was not a religious practitioner… which did not prevent him from marrying in 1842 Léonie Rodrigues-Henriques, from a pious Jewish family from Bordeaux. 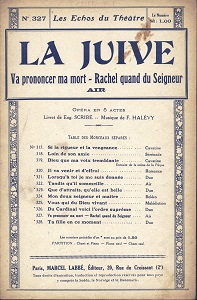 A large part of Karl Leich-Galland’s book is devoted to the study of Fromental Halévy’s operas, their conception and their reception by the public and critics of his time. Fromental Halévy composed the music for no less than 36 operas, including La Juive (1835), which was performed more than 500 times until the end of the 19th century, La reine de Chypre (1841), La dame de Pique (1850), Le Juif errant (1852) and Noé, an unfinished posthumous opera, completed in 1868-69 by Georges Bizet (Fromental Halévy’s son-in-law), then by an anonymous composer, before finally being premiered in Karlsruhe (Germany) in 1885

Abundantly documented, this book gives fascinating details on the life of the composer and – of interest to us – his relationship to Judaism. One learns that Fromental Halévy entered the Paris Conservatory in Luigi Cherubini’s composition class when he was barely 10 years old. At the age of 15, he was a repetiteur of solfège at the Conservatoire. At 17 and 18, he was twice awarded the Second Prize of Rome before winning the First Prize in 1819, at the age of 20. Following the assassination of the Duke of Berry on the night of February 13-14, 1820, he composed, at the request of the consistorial authorities of Paris and Cherubini, a De profundis in Hebrew (the psalm 130 Mimaamakim) which was performed on March 24, 1820 at the Parisian temple in the rue Saint-Avoie. The imposing work, which lasts about 25 minutes, is written for a three-voice male choir and large orchestra. The solos were performed by Israël Lovy (1773-1832), the first cantor of the Jewish Temple. It should be noted that this work was written just before Fromental Halévy’s departure for Rome, where he was to spend five years at the Villa Medici. According to Karl Leich-Galland (p. 10), Fromental Halévy was granted a one-year dispensation to stay to support his father who had just lost his wife. It was not until the spring of 1820 that Halévy was able to reach Rome. 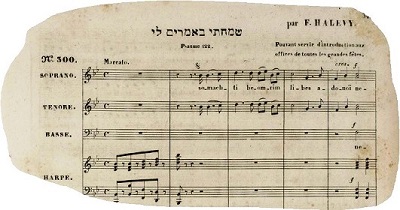 In addition to his lyric works, which constitute the main part of his musical production, Fromental Halévy composed a large number of melodies, romances and duets, as well as seven psalms for the Israelite cult (including Psalm 100: Mizmor lessodo, Psalm 115: Adonai Zehonorou and Psalm 118: Min hametsar which closes the Hallel) and three prayers (Schema Israel, Vajehi binsoa hooron, Jigdal)[2]See Ruth Jordan, Fromental Halévy, His Life & Music, London 1994, p. 177.. He also composed Catholic music: an Agnus Dei, a Gloria in excelsis Deo, but as he maliciously pointed out, never a Credo (p. 75).

Fromental Halévy’s relationship with the Jewish consistorial authorities was courteous but distant. In 1851, Halévy agreed to sit in the first Singing Commission in charge of the reorganization of the music of the Israelite cult. Dissolved in 1852, this commission was reactivated in 1855 and again in 1858. Fromental Halévy held the honorary position of President and, before his death in 1862, helped to publish the melodies of Israel Lovy[3]See the article by Hervé Roten, “Le patrimoine musical de la Grande Synagogue de la Victoire”, La synagogue de la Victoire, 150 ans du judaïsme français, éditions Porte-plume, 2017..

At the end of his work, Karl Leich-Galland sums up Fromental Halevy’s relationship to his Jewishness very well: « After sixteen years of marriage, he was very surprised by the strict observance of the Jewish Passover in his wife’s family, and in 1859 privately expressed his disagreement with the ‘devotees, the pious, the pure’ of Judaism. But this in no way meant a break with the ‘God of his fathers’ (La Juive, no. 8) and Jewish institutions. Halevy was a member of the Consistory, composed for the synagogue and said publicly in 1848, at the time of the nomination of candidates for election to the National Assembly, to Father Deguerry, giving him a fraternal embrace that ‘we worship the same God, we do not follow the same cult’. Unlike other artists whose parents were Jewish, Halévy did not hide his religious affiliation. It is then quite understandable that the famous composer was the pride of his co-religionists. » (p. 128).