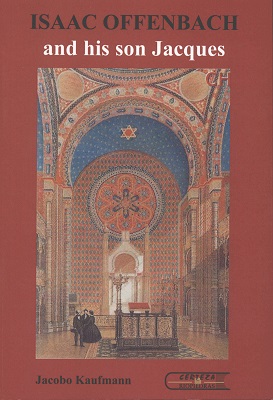 Isaac Offenbach (1779-1850) was for 30 years cantor at the Jewish Community in Cologne (Germany), as well as a talented composer and writer. This book, written by Jacobo Kaufmann based on the discovery and research of so far unknown documents and sources, helps the reader understand the musical inspiration of Jacques Offenbach, as well as the environment in which he evolved. Jacques Offenbach was clearly influenced by the Jewish liturgical compositions of his father Isaac. This new light on the sources of Jacques Offenbach’s work, which blend Jewish, German and French music, shows an aspect of the composer that was neglected by the biographers for nearly 150 years.

At the same time it provides a dramatic and colourful description of Jewish life in the 19th century in Germany and France, its ordeals and dilemmas, against the background of decisive changes affecting Europe’s social, political, and cultural scene.

The book includes a musical theatre play and several poems never published before, the largest Offenbach family tree ever compiled, more than 30 illustrations with reproductions from Isaac Offenbach’s musical scores and manuscripts, as well as many recently discovered documents related to his son Jacques.

The reading of this book will be usefully completed with the listening of the CD Jacques Offenbach and friends – From the Synagogue to the Opera, released in 2019 by the EIJM’s publishing house.

Jacobo Kaufmann
Born in Buenos Aires, in Argentina, Jacobo Kaufmann led an international career as stage director of theatre and opera, set designer, playwright, writer, translator and researcher. He was director of opera at the music’s academy of Jerusalem and gave master-classes worldwide. For many years, Jacobo Kaufmann was interested in Jewish theatre and music, and did research on the life and work of Jacques and Isaac Offenbach. His books Isaac Offenbach and his son Jacques, and Jacques Offenbach in Spain, Italy and Portugal, written after the discovery of original documents, were translated in several languages and are internationally renowned.