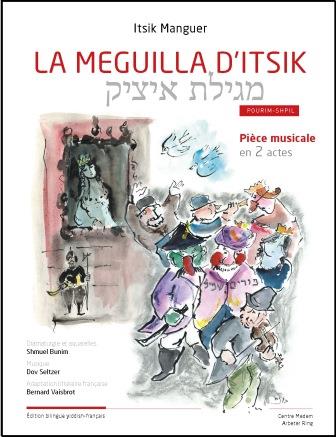 Released in March 2015, the Medem Center Arbeter Ring in Paris published the famous Purim Shpil written by the poet Itsik Manger (1901-1969), with lyrics and music score, put on music by Dov Seltzer.

Like all Purim Shpil, the story is based on the scroll of Esther which we read in the synagogue during Purim. All the main characters are there: Mordecai the wise, his niece Esther, the king Achashverosh and his evil Prime Minister Haman. But it’s a Purim Shpil, and therefore it is not obligatory to follow the Biblical text literally. So various other characters appear, such as Zeyresh the witch, Vayzosse the chief redactor and Fastrigosse the tailor.

Itsik Manger transplants biblical characters and events in the spirit of his own times and employs numerous details to place them in the universe where he grew up. For example, Mordecai, Esther’s uncle, becomes Reb Modkhe, the form of address commonly used by Eastern European Jews. As both a shadkhn (matchmaker) and shtadln (mediator), he embodies two quintessential comic figures of the Yiddish literary tradition.

Manger adapts the natural and cultural decor as well as the traditional dress codes and eating habits of the original text. Queen Vashti wears a crinoline, Mordecai shows up with his umbrella, and the evil Haman pours himself “a little glass of vodka and nibbles a warm hamentash”.

It is not uncommon for characters to be anachronistically aware of the future holiday of Purim and of their own role in the story as it unfolds. Thus, Mordecai reports on the conspirators who have been plotting the kings’ assassination, “But Mordkhe denounces all that to the tune of the Megilla,” and the poem ends with these words, “[…] the sky is blue, like a prayer./ Only the flies on the wall/ hum the Megilla of Esther.”

The original music score comes with a remarkable French adaptation by Bernard Vaisbrot, and the paintings of dramaturg Shmuel Bunim.

Learn more and buy the book 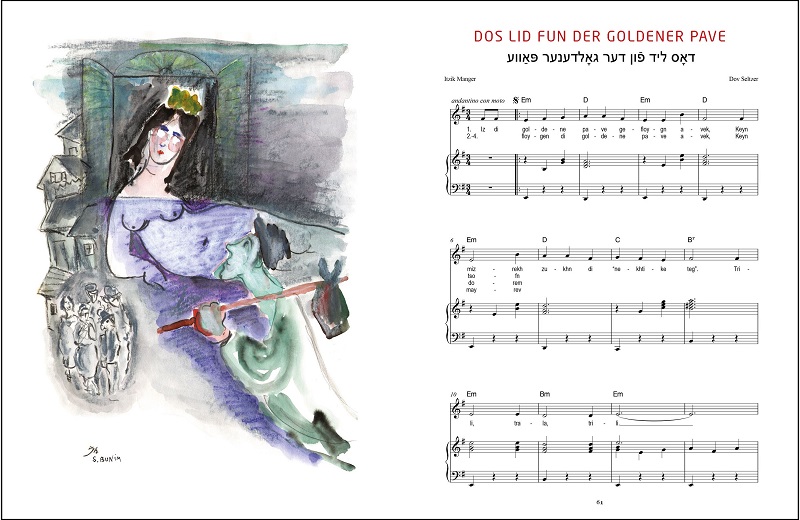