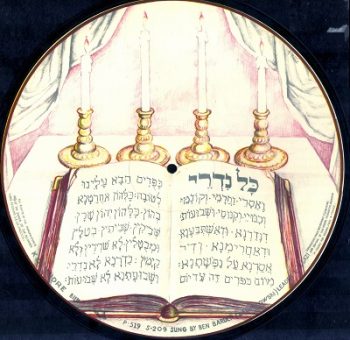 Among all our 78 RPM discs (almost 500 discs in September 2017), a few of them stand out from the rest. Such is the case for Ben Baruch’s picture discs. Published by the record label Saturne, these big 78 RPM discs 30cm in width were recorded between 1946 and 1950.

The first discs that weren’t « simply » black appeared around 1918. But the real commercial success came much later: for a long time these objects were expensive and mainly intended for rich collectors.

The record label Saturne would publish around 150 picture discs until the middle of the 1950s. Other countries would follow, and we will also start to see picture discs in Great-Britain, in Japan, in Australia…

In October 1950, the record label Saturne publishes a serie of picture discs of Jewish music. In total, 18 discs were published with the singers Berland and Ben Baruch. Ben Baruch recorded 11 discs from these 18.

On one side of one of these discs, we can hear the Kol Nidre ; on the other side, a Kaddish. Let’s mention that these two songs performed by Jacques Zaludowski, aka Ben Baruch, are directed by Léon Algazi (1890-1971), who will be director of the music of the consistorial temples in Paris from 1961 on.

Browse the archives of Ben Baruch on our online catalog RachelNet

Read the biography of Ben Baruch