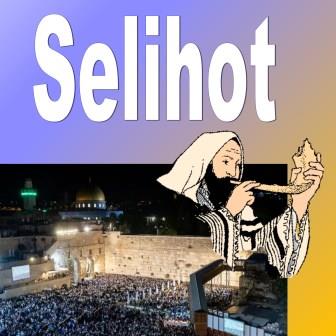 The Selichot are penitential prayers in which the worshipper implores forgiveness to God for the sins committed. This tradition is based on the Thirteen Attributes of Mercy which have been, according to the tradition, passed on from God to Moses. These thirteen attributes are the following: « The LORD, the LORD, God, merciful and gracious, long-suffering, and abundant in goodness and truth; keeping mercy unto the thousandth generation, forgiving iniquity and transgression and sin; and that will by no means clear the guilty; visiting the iniquity of the fathers upon the children, and upon the children’s children, unto the third and unto the fourth generation.” » (Exodus 34, 6-7)
Many religious poems (piyutim) have been written during centuries to illustrate the enunciation of these thirteen attributes: it is those poems, centered on the idea of forgiveness, that we call selichot.

In the beginning, the selichot were read during Yom Kippur service and for fasts. Then this tradition took place during the 10 days (yamim noraïm) between Rosh Hashanah and Yom Kippur. At the time of the geonim (6th to the 9th century), it was recited every Monday and Thursday after the Amidah of the morning service.

The Ashkenazi communities and the Chasidim start reciting the selichot on Saturday evening preceding (for at least four days) Rosh Hashanah service. The Sefardi communities read it at dawn before the Morning Prayer for forty days, starting on the first of Elul. In Israel, the tradition is to recite them in the middle of the night. After the destruction of the second Temple of Jerusalem, the selichot were read during special circumstances, particularly at times of drought when rain was needed for agriculture. We recite them also during various fasts.

The various rites have their proper texts and traditions. And the style of the selichot changed with time. The appearance of stanza and rhymes is thus linked to the aesthetical Byzantine, Syrian and Arab canons, leading to the birth of poems with 2 line stanzas (the selichot), 3 line stanzas (shlishiyot) and 4 line stanzas (shalmoniyot).

Several selichot – such as Adon haselichot, Atanou lehalot, Ben Adam, El erech apayim, El melech yoshev – spread to many communities. Many of the authors of these poems stayed anonymous, but we know some names, such as the famous Moïse Ibn Ezra (1055-after 1135) who was called then ha-Sallah (« the Author of selichot »). Finally, many selichot were written following an acrostic style (the first letters of each verse are in alphabetical order like in the selichah Ashamnou mikol ’am) ; and it also happens that the author’s name appears in acrostic, after the alphabetical order.