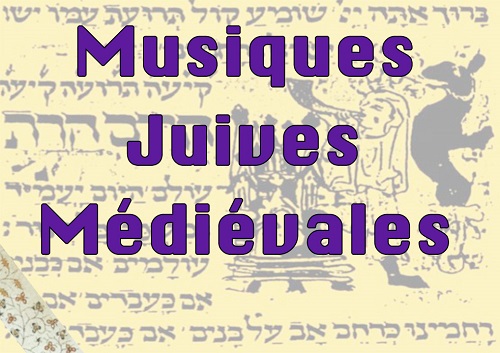 When we talk about “Middle Ages”, we usually mean a time period in Europe that starts in the 5th century with the fall of the Western Roman Empire, and that ends in the 15th century with the Renaissance and the great discoveries. During this long period of a thousand years, we find traces of Jewish communities in Orient as well as in Occident. 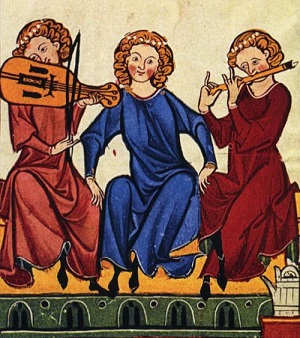 In France, the first Jewish communities were founded as soon as the 1st century of our era, mainly on the Mediterranean coast, near great rivers: Rhône, Saône, Rhin. It seems afterwards that a Jewish presence continues in the South of France, where merchants did national and international trading. In the 10th century, Jewish communities settle in the North of France around rabbis, whom the spiritual authority goes along with a deep knowledge of the Bible and its oral transmission, the Talmud. The town of Troyes sets oneself apart with Rachi (Salomon b. Isaac, 1040-1105).

We have no musical score of this period (Jewish people didn’t write the music), apart from three fragments of nematic notations dating from the 13th century. These documents of great value have been written by Abdias the Norman proselyte. This descendant of a noble family from Normandy, destined to be clerk, probably learned nematic notation in a monastery. Attracted to Judaism, he converts in 1102; he then lived in various Eastern Jewish communities (Babylonia, Syria, Palestine) until 1121. We then find him in Egypt where he goes to the ancient synagogue Ben Ezra of Fostat, situated today in the suburbs of Cairo. It’s in this synagogue’s genizah that was found in 1918, and in 1965, two booklets coming from a collection of synagogal chants and containing the musical notation of a biblical cantilation, as well as two piyyutim. These two poems, Mi al hah h’orev and wa-eda mah, may have been written by Abdias himself. They are written in the Western monodic singing style from the Middle Ages. The cantilation Baroukh Haguever contain five biblical verses, and is typical of an ancient musical tradition as this melody has been kept until nowadays in the oral tradition of Eastern Jewish communities of Syria, Djerba and in Italy. 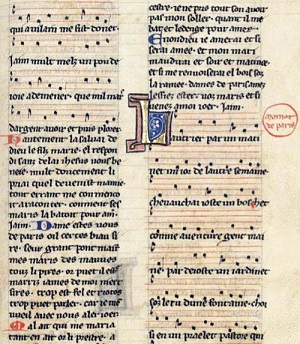 In a more popular level, minstrels, troubadours or Jewish minnesänger traveled through Europe and presented their shows in front of Jews and non-Jews. They sang their poetry in exactly the same way as their non-Jewish colleagues. When they performed in front of a Jewish audience, they added a few subjects taken from the Bible or the Midrash that they sang in the vernacular language. It was found in the genizah of Cairo for example, a notebook of a Jewish minstrel, from 1382, containing notes of profane and sacred songs with German words written with Hebrew letters.

In the 13th century, in the North of France, the songs of Jewish communities used various tunes from the minstrels songs. Oïl language and Hebrew were mixed together, in particular in religious poetry (piyyutim), and in wedding or circumcision songs.

Various researches led to the discovery of Hebrew manuscripts of some of these songs, of which two of them at least had in their margin the name of the minstrel song written. (See the booklet of the CD Juifs et Trouvères)

In the Iberian Peninsula, many Jewish musicians were employed in various courts of Christian or Arab dignitaries. The Christian kings of Spain had a high esteem of Jewish musicians: the courts accounts between the 14th and 16th centuries show they were quite rather well payed.

Even if there is very little of this history of medieval Jewish music, a few testimonies show that yesterday’s Jewish people were not as different as today’s: they liked music, played it sometimes professionally, in the profane field as well as the religious one.

Watch excerpts from the show : La source de vie, At the time of the minstrels