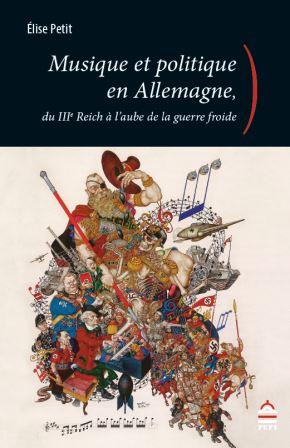 This documented book, and coming in part from a PhD of History of Music written by the author in November 2012, presents an original analysis of the musical politics in Germany, since the arrival of Adolf Hitler at the head of the country in 1933 until the formation of two politic entities in 1949 in the context of the Cold War. The study of the politics executed under the IIIrd Reich show how the notion of purity conditioned the musical life and creation, since the aryanisation of composers of great tradition such as Wagner and Beethoven until the search of an impossible “nazi” music. The analysis of struggle of power between the main cultural protagonists of the Reich, in particular the propaganda minister, Joseph Goebbels, and the ideologue of the nazi party, Alfred Rosenberg, brings to light the very strong incoherences of a system that will forge the concept of “degenerated music”, without banishing it totally.

After the war, the musical creation is nourished by the conflicts between Allies while the Cold war is profiling. The struggle of influence and the beginnings of our consumer society, develop a new particular context which allow the creation of the Darmstadt School and festivals of contemporary music, but also the surprising reintegration of prejudiced musicians in the nazi regime.

By studying regimes which, finally, build themselves by mutual opposition, Elise Petit brings to light wills or utopias of breakage with the musical politics. She questions the possibility of breakage in the artistic field while it is related to politics and brings to think again the notions of ” Zero Hour ” and tabula rasa in the XXth century in Germany.

A thrilling book which shows how music, and art more generally, can be used by ideologies as a tool for propaganda or reeducatioon of the popular masses. Frightening and instructive !

About the author
Élise Petit is a music professor and a PhD in History of Music.
Her works speak of the relations between politics and music in Germany in the XXth century. She thinks about the place of music under the IIIrd Reich and in concentration camps. She co-wrote with Bruno Giner in 2015 the book Entartete Musik. Forbidden music under the IIIrd Reich.
She also studies musical politics engaged after the Second World War and during the Cold War. About that, she supervised the book Artistic creation in occupied Germany (1945-1949) : Aesthetic and politic issues (2015), which talks about music, but also of theatre, literature, cinema and graphic arts.