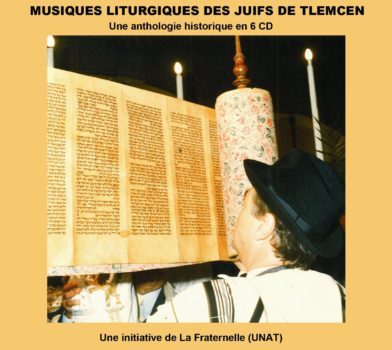 It was produced by the “Friends of the CFMJ”, on the initiative and thanks to the financing of “La Fraternelle – UNAT”, headed by the president André Charbit, during the meeting of the Tlemceniens in Israel, in February 2011.

The following participated in the recording: Chief Rabbi Georges Haïk, Rabbi Daniel Ashkenazi from Jerusalem, Rabbi Yits’hak Chouraqui, Mr Yves Mergui and Mr Maurice Tapiero from France (Aix-en-Provence and Paris) while Mr Roger Hamiache was responsible for the general organisation of the operation.

It is an important – but not exhaustive – collection of prayers recited throughout the year on holidays and also on family events.

The recordings were made in Jerusalem on 8 and 9 February 2011 in the Or-Zaroua synagogue Production: La Fraternelle – UNAT, under the chairmanship of Mr André Charbit