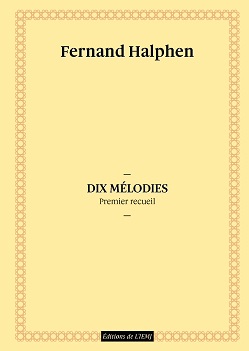 FERNAND HALPHEN
orn into an upperclass bourgeois family of merchants interested in arts, Fernand Halphen learned to play the violin with Joseph Marsick, then began composition with Gabriel Fauré. In 1888, he enrolled in the classes of Jules Massenet in the Paris Conservatory at the same time as Florent Schmitt, Henri Büsser, Max d’Olonne, Charles Koechlin, George Enesco and Reynaldo Hahn, and obtains the second place Rome’s Prize in 1896.
During his short life, Halphen composed nearly a hundred melodies, more than thirty pieces for piano, duos (especially for violin and piano), a string trio and a piano trio, orchestral suites, a symphony in C minor dedicated to Fauré (1898), and Le Cor fleuri , a lyrical fairy tale in one part, premiered at the Opéra Comique on May 10, 1941. He also wrote two psalms and a hymn for synagogue, in addition to two instrumental pieces inspired by traditional Hebrew songs (Andante religioso and Prière ). Head of the territorial music infantry regiment during WWI, he passed away in 1917 after an illness he contracted at the war front.

These new publications have been supervised by Hervé Roten, Laure Schnapper and Célia Triplet, under the auspices of the European Institute of Jewish Music, where the manuscripts, scores and letters from Fernand Halphen are available, donated by his descendants. They have been elaborated by taking into account his personal manuscripts and autographs, and the first round of publications by Astruc in 1906.

REYNALDO HAHN
Composed on June 1st 1889 (when Hahn was not even 15 years old !), Le Petit nocturne is a hitherto unreleased work from the musical archives of Fernand Halphen.

Born in Caracas to a Venezuelan Catholic mother and a German Jewish father, Reynaldo Hahn was the youngest member of a family of nine children that moved to Paris in 1878. He enrolled in the Paris Conservatory at the age of 11 and became a composition pupil of Albert Lavignac and Jules Massenet. In the 1890s, he socialized in Parisian salons (notably that of the Halphens) where he sang his melodies while playing the piano. He met with people such as Stéphane Mallarmé, Edmond de Goncourt or Marcel Proust with whom he became a lover until 1896.
Appointed voice professor in the Ecole Normale de Musique de Paris in 1920, Reynaldo Hahn socialized with Pablo Casals, Jacques Thibaud and Nadia Boulanger. During the period between the wars, he wrote numerous operettas and musicals, but apart that mainstream music, he returns to a style that he had put aside back then : chamber music. Concerned about his Jewish origins, he left Paris in 1940 for Cannes and then Monte-Carlo. In 1945, upon his return to Paris he was elected a member of the Fine Arts Academy and became the director of the Paris Opéra. Struck down with a brain tumor, he passed away in Paris on January 28th 1947. He is buried at the Père Lachaise cemetery.