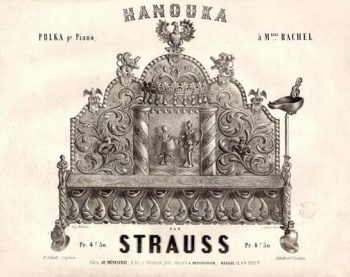 Isaac Strauss, a famous composer during the Second Empire, was born on June 2, 1806 into a Jewish family in Strasbourg. Among his works, consisting of numerous dances, is an astonishing polka entitled Hanukkah. 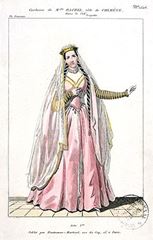 This music score, entitled Hanouka, was composed by Isaac Strauss around 1851.
It is dedicated to Mademoiselle Rachel (1821-1858), a famous actress of the 19th century, who brought back to fashion classical tragedy, as opposed to romantic drama. Mademoiselle Rachel – her real name was Élisabeth-Rachel Félix – created a new model of actress and woman, among whom would later inspire Sarah Bernhardt (1844-1923) was later on inspired by.

Published in Paris, this sheet music of 7 pages was intended for a small ensemble (piano, cornet, violin and doublebass). It is a polka – a quite rapid double-metre dance music, in fashion during the 19th century – in which the main theme would feature the melody of the emblematic prayer of Chanukah : Maoz tsur.

See the video on the Isaac Strauss Study Day on November 18, 2018 at the Museum of Jewish Art and History (Paris)