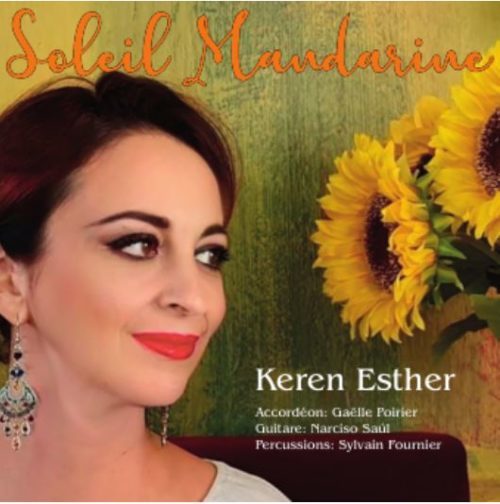 Soleil mandarine is Keren Esther’s fourth album, after A la una yo naci (Label Vde-Gallo), Fuente Nueva, published by the European Institute of Jewish Music (Collection Discovery) and Tango Ladino, un sueño.
In this album, which was born during the darkness of the first confinement, Keren Esther wanted to convey a happy and positive message.

Immersing herself into the writing of her own songs, she was able, through this album, to reconnect with the enlightened joy that was hers when she wrote her own poems as a child.

A joy that she passes on so well, with the delicate performance of her songs from the classical Judeo-Spanish repertoire, but also with more personal texts.

“ This is how Soleil Mandarine was born: an ode to the earth, an ode to the sun! The sun of Spain, the land of my ancestors, the sun of Morocco where my family was born, the sun of the Sephardic songs that my mother sang at home, the sun of Provence which fills the paintings of Vincent Van Gogh!
For Soleil Mandarine is also a tribute to the precious people who have enlightened my path. Through these people, this album pays tribute to all the beings of light”. Keren Esther

Purchase the CD in the EIJM’s online shop