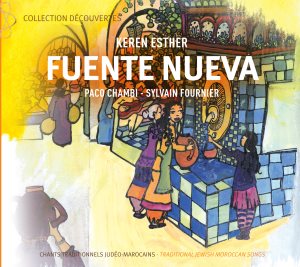 4th CD OF THE DISCOVERY COLLECTION

Yaacov and Yohevet meet and fall in love in Tangier, 1930, in the neighborhood of Fuente Nueva (the new fountain). This love produces several children, among them a girl, Clara, Esther’s mother. During her childhood, Keren Ester was nurtured by the Judeo-Spanish songs of her mother and grand-mother. Songs that speak about love, weddings, and also about abandoned men and women. Some of these songs come from Turkey and the Balkans, and interwoven in a story that Keren Esther inscribes with her family history.

Accompanied on the guitar and the drums by Paco Chambi and Sylvain Fournier, this very beautiful album by Keren Esther exhale the sweetness of Mediterranean life, the flavor of mint tea and the shadows of Moorish gardens.