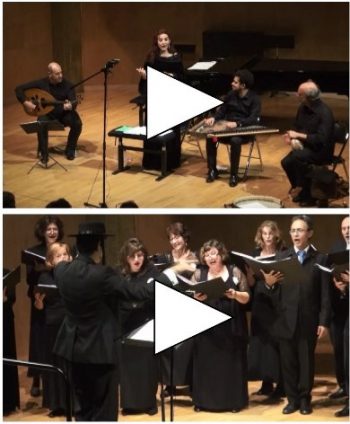 The Spirit of Granada / Liturgical Choirs and Yiddish Songs

Watch video clips of the fourth edition of the European Institute of Jewish Music’s Gala Concert which took place on Sunday November 11th 2018, Cortot Hall (Paris), with the support of the Henriette Halphen Foundation, under the aegis of the Fondation du Judaïsme Français.

In the program : The spirit of Granada , performed by Françoise Atlan and Liturgical Choirs and Yiddish Songs performed by the Ensemble Choral Copernic conducted by Itaï Daniel accompanied by Yun-Yang Lee on the piano.

In the first part of the concert, Françoise Atlan, vocals, Fouad Didi, ud and violin, Nidhal Jaoua, qanun and Pierre Rigopoulos, percussions, took us on a poetic and musical journey in the Mediterranean region, mixing Arabic, Hebrew, Castilian and Judeo-Spanish cultures, through wedding songs, lullabies and love songs, mystical or profane. To this Andalusian repertoire was also added Judeo-Morrocan, Algerian and Tunisian songs, in particular a beautiful song from the Tunisian singer Habiba Msika.

In the second part, performing Yiddish songs and liturgical tunes from the 19th and 20th centuries, the Ensemble Choral Copernic, conducted by Itaï Daniel, and accompanied by Yun-Yang Lee on the piano, played the works of the great repertoire of Jewish music, religious or profane, maintaining thus the high musical tradition from which is nourished Copernic’s synagogue’s liturgy.