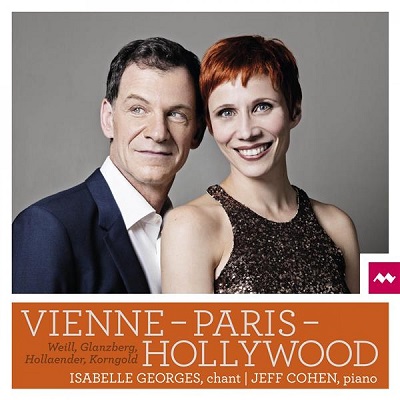 “It was at a concert at the Maison de la Radio in Paris as part of a weekend devoted to Erich Wolfgang Korngold that I met the pianist Jeff Cohen and through him an extraordinary repertoire, some of it little known. It was love, if not at first sight then on first hearing!

I first became fascinated by the lives of those whom Goebbels labelled “degenerate Jewish artists” while writing my show Padam Padam about the life and work of Norbert Glanzberg. Fleeing Germany and Austria to seek refuge in France or the United States, and despite being driven into exile by war and Nazi barbarity, they found the strength to carry on writing and composing. Norbert Glanzberg is representative of a generation of highly promising composers forced by historical turmoil to leave their native land and, in some cases, find new means of expression in order to survive: names like Erich Wolfgang Korngold, Kurt Weill, Werner Richard Heymann and Friedrich Hollaender come to mind. Max Steiner’s path may have been somewhat different, but Jeff and I very much wanted to include him in this programme. Born in Vienna, he grew up in the heady atmosphere of the Austro-Hungarian capital just before its decline and emigrated to the United States in 1914, working first on Broadway before moving to Hollywood, where he wrote the scores for King Kong, Arsenic and Old Lace, Gone with the Wind and Casablanca. He was in a way a forerunner of all the later exiles. We have also included As Time Goes By, the hit song from Casablanca written by Herman Hupfeld, born in the United States, the text of which is a kind of hymn to continuity despite everything.

Walking in the steps of these composers and performing their songs we can hear, sounding clearly through the tumult of history, the voices of men who, for all their fear and distress and amid the noise of jackboots, managed to heed the impulses of their beating heart and write tunes and songs which, in mischievous or poetic vein, cock a snook at stupidity and intolerance. Korngold said: “Dividing my time between opera and film music, I sometimes played at being serious and at other times seriously wrote songs.” In that spirit, Jeff Cohen and I have crafted an album that ranges from the classical repertoire via cabaret to film music. Humbly and with passion, we have sought to make these songs our own, and in doing so to create a moment out of time, imbued with tenderness, poetry and humour.”
Isabelle Georges

Listen to the radio broadcast dedicated to the CD Vienne-Paris-Hollywood : chansons d’exil