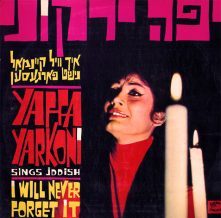 Yaffa Yarkoni was born in Givatayim in 1925. One of her most famous songs is called “Bab-el-Oued” (1948), dedicated to the Israeli soldiers who were killed during the war of independance.

Yaffa Yarkoni was the oldest child in a family of three children. Her parents, Avraham Abramov and Malka Alkhassov were Caucasian Jews who emigrated in Palestine at the beginning of the 20th century.

She spent her childhood in Tel Aviv and Givat Rambam (today’s neighborhood called Givatayim), and began her artistic carreer in a small café called « Tzlil », and performed with her sister Tikva and her brother Binyamin in a popular trio called « Bamati ».

Following the advice of the singer Shmuel Fischer, Yaffa joined a ballet troupe led by Gertrud Kraus, one of the dancing pioneers in Israel, and stayed about ten years. 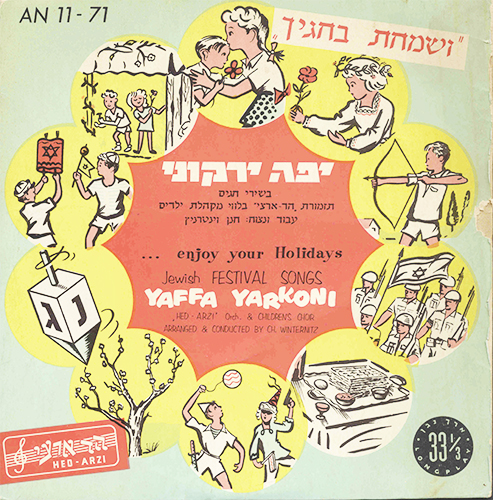 On September 21, 1944, she married Yossef Gustin, who left to go to war as a volunteer of the Jewish Brigade Group of the British Army on the day following their wedding. Gustin died on March 29, 1945 in the fight against the Germans on the river Senio, in Italy. The song Ouri, with lyrics written by Rafael Klatchkin and music by Issakhar Meron, was created in his memory.

In 1948, Yaffa married Shaike Yarkoni (who passed away in 1983), commander in the Hagana, and one of the founders of the Israeli Defence Forces. They had three daughters together.

She then joined the musical troupe « Khichtron » of Tsahal affiliated to the Givati brigade. Bab el-Wad, a song that she performed at the time, had become a hit, that is sung each year during Memorial Day (Yom ha-zikaron). After the war, she performed songs for the radio station Kol Yisrael.

Most of Yaffa Yarkoni’s songs were written by Tuli Reviv and Haim Hefer. She also performed some of the first songs for children by Naomi Shemer. 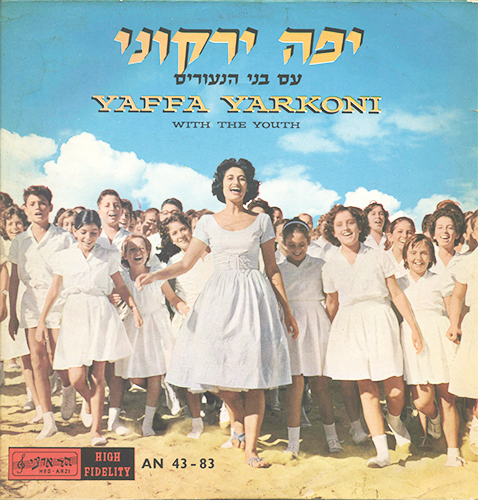 During a break in the Independance war, Yarkoni recorded a first disc in the studio Radio Doctor, which is acclaimed by the public, especially the Romanian song Eynayim yeroukot, considered today as the first pop song in Israel. After that, she signed with the new music label Hed Artzi that released all of her albums.
The album Bab el Wad gathers songs of the Independance war, such as Haamini yom yavo, Rabotaï Hahistoria khozeret, Hafindjan, Khen efschar, Doudou, Yatzanu at that the audience thought of being Yaffa Yarkoni’s creations, even though many of them were performed before by the « Tchizbatron » troupe.

In the 1950-1960’s, Yaffa Yarkoni became the n°1 singer in Israel, especially with songs broadcast on the radio, which praised the state of Israel (Baarvot Hanegev, Hasavta baNegev (lyrics : Avchalom Cohen, 1948)).
Her greatest success happened in 1951 with salon songs, waltzes and tangos, performed during balls in neighborhood cafés.
In 1959 was released the album Nirkoda im Yaffa Yarkoni, which gathered songs, such as Habibi, Artzenu haktantonet, Skharkhoret. The yellow press often spoke of an imaginary rivaliry between her and the other great singer of the time, Shoshana Damari. 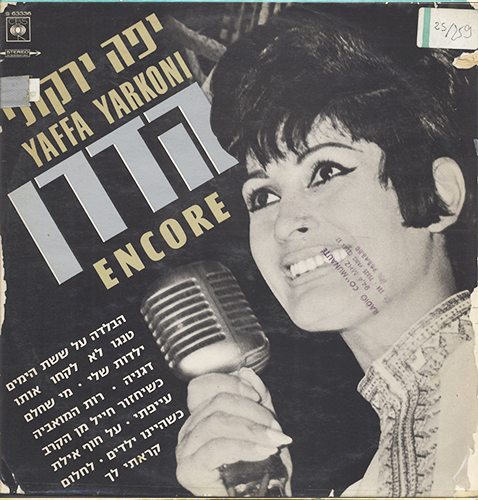 Still in the 1950’s, she recorded several discs for children, of which two knew a big success : Chirey yeladim kevakachatkha, with the songs Agala im soussa (recorded first in 1948) and Doubon Yambo or Youmbo written by Yekhiel Mohar, and the album Chirim miKineret (1957) with songs by Naomi Shemer, composer and poet of Kvoutzat Kinneret (a kibbutz in Galileo), which was then beginning in the musical world.
Yaffa Yarkoni recorded then another disc for children, with the hit song Abba cheli with lyrics by Talma Eligon.

She passed away on January 1, 2012, at the Re’out hospital in Tel Aviv, from Alzheimer’s disease. Yaffa Yarkoni left behind her three daughters, eight grand-children and eight great-grand children.

Listen to the playlist dedicated to Yaffa Yarkoni

Browse our archive on Yaffa Yarkoni