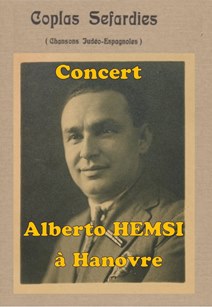 Thursday March 22, 2018 : an event organised by Das Europäische Zentrum für Jüdische Musik and the reformed Jewish community of Hanover, in collaboration with the European Institute for Jewish Music…

On March 22, 2018 will be held in Hanover the first concert of the complete Coplas Sefardies (Judeo-Spanish songs), performed by Assaf Levitin (vocal) and Naaman Wagner (piano) for the occasion of the release of their CD Coplas Sefardies – vol. 1.

This concert, organised by Das Europäische Zentrum für Jüdische Musik (EZJM) and the reformed Jewish community of Hanover, will be preceded by a presentation by Ingrid Wettberg, president of the reformed Jewish community of Hanover, followed by a speech by Sarah Ross, director of the EZJM.
The European Institute for Jewish Music will be represented by its director, Hervé Roten, who will show a short film drawing the life and work of Alberto Hemsi. Finally, Assaf Levitin will introduce the concert.

Since 2004, the European Institute for Jewish Music is depositary of the archives of the composer Alberto Hemsi (1898-1975). Given in July 2004 by Myriam Capelutto Hemsi (1912-2005), widow of the composer, this holding include rare documents (manuscripts of the composer, photographies, magnetic tapes and discs…) which form today one of the richest archive holding of Judeo-Spanish music in the world.

The release of the complete Coplas Sefardies by the Europäische Zentrum für Jüdische Musik (EZJM) in Hanover and the music label Rondeau Production mark the first step of a French-German collaboration and the beginning of the creation of a european network of Jewish music centers, based on the exchange of information, the valorisation of the physical and digital contents, and the organisation of conferences and concerts at a european scale.