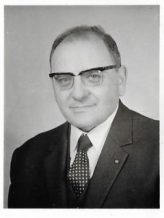 Born on December 11, 1911 in Géryville, near Oran (Algeria), Zabulon Sebban lived a full life. With his wife, Odette Rachel Cherqui, he had seven children and was negotiator and manufacturer in Algiers for more than thirty years.

While he was a teenager, he followed the Rabbinical Seminary « Ets Haïm » in Algiers, and his classmates were to be the great Rabbis Meyer Jaïs (Paris), and Simon Morali (Nancy then Nice). With his masters, (the great Rabbi Dayan Isaac Hanoune, the great Rabbis Loufrani and Isaac Morali), he acquired a deep knowledge of sacred texts as well as an appetite for study. 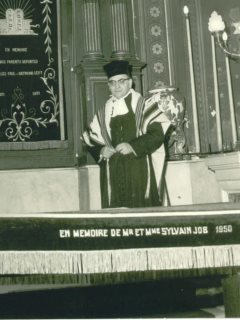 A volunteer cantor from 1927 to 1961 in the Great Termple of Algiers, then in the small synagogue of the rue Sainte, he excelled in traditional liturgy. Singing, sharing and teaching at the same time, that is what he used to do in particular, while he expressed, with silence or rhythm, this word or another (or even a syllable) in a sentence, which was important for a better understanding of the prayer. His soft, warm and modulated voice let us guess the origins of these melodies: Spain, Portugal, Morocco, Algiers…

Responsible for the several Talmud-Torah of Algiers, endangered by the National Liberation Front, he was forced to leave for France to build a new life. He would become minister of religion and military chaplain of the jails in Lunéville (1961 to 1970), then in Antibes, and would obtain the title of Rabbi in Dijon (1971 to 1978). 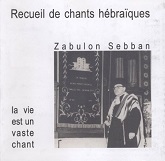 In the last years of his life, he finished a remarkable work which made a book « Rimonim Ba-Pardès », « Verger des grenades » (Editions du Palio), inwhich he speaks of the great subjects of culture and philosophy of Jewish life. This book was put online by the Alliance Israélite Universelle on the network of Jewish libraries Rachel.
The songs available in this biography were recorded in his home and shows what he liked to pass on.

Zabulon Sebban died in Paris on October 13, 1983. He was buried in Lunéville. His wife died in February 1996 and was buried next to him.