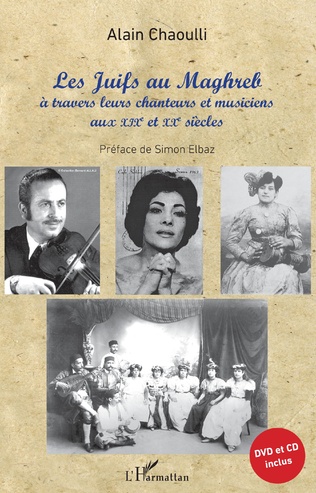 Specialist of Iranian Jewish culture, Alain Chaoulli presents in his book a wide panorama of Judeo-Arab-Andalusian music of the three countries from the Maghreb, Algeria, Morocco and Tunisia.

The author focuses on several aspects of the artistic careers of Issim Israël Rozzio (1897-1939) aka Cheikh El’Afrit, « The Clever », who was invited by the bey of Tunis to perform in the Bardo Palace every week, Elie Touitou ( 1932-2000) aka El Kahlaoui Tounsi, percussionist expert of the darbouka, who did a great career in the USA, Maurice Meimoun (1929-1993) aka Meimoun El Tounsi, ud and violin player, the great Raoul Journo (1911-2001), decorated by French minister Jack Lang and Habib Bourguiba, Habiba Msika (1903-1930), who was killed, Asher Mizrahi (1890- 1967), born in Jerusalem and who passed away in Israel after spending a long time in Tunisia, Hana Rached (1933-2003), daughter of the singer and dancer Flifla Chamia, Leïla Sfez (1874, 1944), niece of Habiba Msika, the Shemmama sisters, Kammuna, Mannana, Bibiya and Bhayka who were accompanied by the famous violin player Kaylu, Louisa Saâdoun (1905-1961) aka Louisa Tounsia and Slama Youssef (1903-1970), great player of zither, buried in Jerusalem.

The Jewish languages and musical instruments are also mentioned in the book, and several chapters are dedicated to the rise of North-African Judaism, although these sometimes contain mistakes, or a tendency to embellish and create an idyllic cohabitation that really did not exist.

In short, despite a few inaccuracies, this book, which comes with a CD and a DVD by Simon Elbaz on the Matrouz, represents a rich source of information.

A nice engagement with the Jewish musical heritage of North Africa.
Purchase the book