Upon the recent passing of her mother, Lenka discovered two tattered notebooks of hand-written poetry that her grandmother, Anna Hana Friesová (1901-1987) wrote in the Terezin (Theresienstadt) concentration camp where she was imprisoned during World War II. Lenka was surprised to discover that a majority of the poems were intimate fantasies and love poems that you’d never expect to be written on the brink of death. “I imagine that the verses she wrote represented the one time each day that my grandmother had some control over her life. She dreamed of this imaginary world to survive the cruelty of the real one.” So, Lenka decided to bring these stories back to life – as music, in this stunning tale of how her mother and grandmother survived Terezin – and kept their sanity.

The poems were set to music by seven Canadian and Czech composers. Offering a rich musical tapestry, the lush arrangements span from string sextet, beatboxing, spoken word and jazz trio to a cappella songs, and feature colourful instruments such as marimba, tabla and bass clarinet, all warmly bathed in Lenka’s signature 3-octave harmonies. 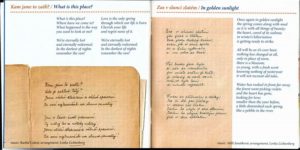