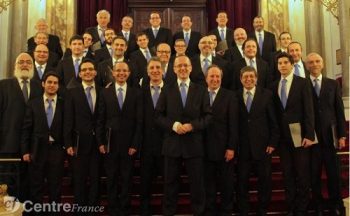 Recording of the concert Liturgical songs of the Ashkenazi Jews, performed on September 7, 2014, as part of the day of study Vox Aurea-Via Sacra 2014, by the Jewish Choral of France under the direction of Hector Sabo.

The Jewish Choral of France was born in October 2006 under the aegis of the APAC (Association for the promotion of cantorial art), in partnership with ACIP (Consistorial Israelite association of Paris). It is composed of around 40 choristers. Raphaël Cohen, the great internationally renowned cantor is the titled soloist. Pierre Lumbroso accompanies the choral at the piano. The choral’s repertoire is mainly centered around Hebraic liturgical music, Yiddish songs, Ashkenazi and Sefardi popular songs and Israeli songs. Hector Sabo does the musical arrangements for men’s voices.
Since its creation, it performed in many places such as the UNESCO, in theatres and in serveral synagogues of France.

Learn more about the program of the 3rd edition of Vox Aurea-Via Sacra dedicated to sacred Jewish music.