Giacomo Meyerbeer was born Jakob Liebmann Meyer Beer to a wealthy Jewish family on September 5, 1791, near Berlin in Tasdorf. His father, Juda Herz Beer (1769-1825) was very involved in the movement for the emancipation and integration of Prussian Jews. At the beginning of the 19th century, the Jewish people did not have Prussian nationality; they were forbidden to hold public office and many other professions were closed to them. It was impossible for any Jew to work in the musical world without converting.

Since he was a child, Jakob was taught by personal tutors: Franz Lauska (1764-1825), piano instructor at the Prussian Court, gave Jakob his first lessons in 1798, as well as composers and keyboardists Muzio Clementi (1752-1832) and Georg Joseph Vogler (1749-1814). When he was 10 years old, Mayerbeer performed Mozart’s piano concerto in D minor in public and quickly acquired the reputation of a brilliant pianist. From 1803 to 1807 he studied composing with Carl Friedrich Zelter (who was also Felix Mendelssohn’s teacher) and on December 12, 1803 he completed his first piano sonata. Attracted by the opera, he then studied under Bernhard Anselm Weber (1766-1821), who was, at the time, the conductor of Berlin’s Royal Opera. At this time Meyerbeer created his first stage composition, the ballet- pantomime Der Fischer und das Milchmädchen, produced on March 26, 1810 at Berlin’s Royal Theatre. 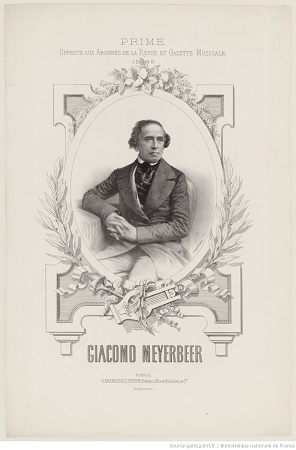 In 1816 he travelled to Italy where he attended a presentation of the opera Tancredi by Gioachino Rossini (1792-1868). This live show was a revelation. The operas that he composed afterwards, (Romilda e Costanza in 1817, Semiramide riconosciuta and Emma di Resburgo in 1819, Margherita d’Anjou in 1820, L’esule di Granata in 1822 and finally Il crociato in Egitto in 1824) gained him a notoriety not only in Italy but in all of Europe where he was considered as good as Rossini. Grateful to Italy which offered him his first successes, he Italianized his first name and introduced himself from then on as Giacomo Meyerbeer.

The essential of his career took place in Paris between 1825 and 1841. With the backing of Luigi Cherubini, on February 18, 1827 he began a very profitable collaboration with Eugène Scribe, the librettist. Their first musical work, Robert le Diable, was performed at the Opera on November 21, 1831 and was a triumph. Meyerbeer became a foreign member of the Parisian Academy of Fine Arts and was granted the title of Chevalier of the French Legion of Honor on January 19, 1832.

The death of the Prussian king Frédéric-Guillaume III in 1840 and the ascension to the throne of his oldest son Frédéric-Guillaume IV was a beneficial moment for Meyerbeer. The new king adopted more liberal measures for the Jews of Prussia. On June 11, 1842, Frédéric-Guillaume IV named Generalmusikdirektor (head musical director) at the Prussian Royal Opera and musical supervisor to the royal court. Director for sacred music was given to another composer of Jewish origin, who had converted to Protestantism, Felix Mendelssohn (1809-1847). 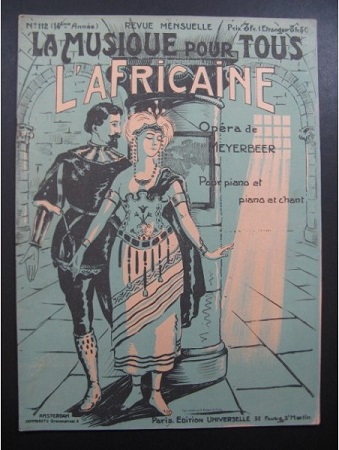 From 1851, Meyerbeer continued to live in Berlin with his family and to participate in the rich artistic life of the city. He still managed to regularly travel through Europe presenting his works.

His intense creative activity hastened his sudden death on May 2, 1864 in Paris while he was supervising the rehearsals of his latest opera, L’Africaine.

During his entire life, Giacomo Meyerbeer never renounced being Jewish. He celebrated family birthdays according to the Jewish lunar calendar and when, at 20 years old, his grandfather died, he promised his mother he would always live conforming to the mosaic laws. His Jewish musical works were however minimal with only two Hebrew compositions. The first one was written in his youth, a Hallelujah for chorus and organ written in 1815 for the Reform community of Berlin, sung in the temple of Judah Herz Beer, father of the composer. 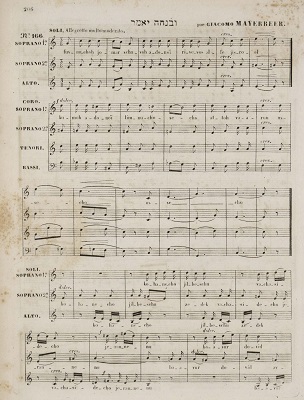 The second musical piece, Ouv’noukho Yomar, is the result of work done by Samuel Naumbourg (1817-1880), one of the principal reformers of the French Jewish cult of the 19th century. In 1846, while he was working to publish of a vast collection of Hebrew songs in two volumes Zemirot Israel, Chants Religieux des Israélites, Naumbourg asked Meyerbeer if he could include one of his own compositions : Prière d’enfants (Children’s Prayers), published the first time in 1839 for three female a cappella voices, before being translated into German in 1841, entitled Kindergebet. Mayerbeer accepted and Naumbourg created an arrangement for a choir composed of men and children using, as the text, the prayer Ouv’noukho Yomar, recited when withdrawing the Torah Scrolls from the Sacred Ark during Shabbat services and holidays. This piece was published in Paris in 1847 in the second volume of Naumbourg’s collection, that contains, at the beginning, pieces from other composers such as Fromental Halévy (1799-1862) and Charles-Valentin Alkan (1813-1888).