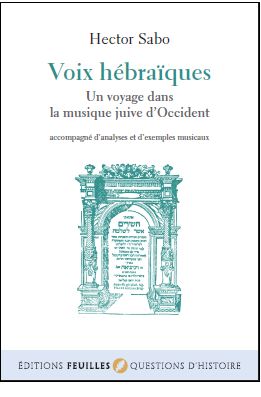 Strong from his experience as a choirmaster in the Great Synagogue of Strasbourg and in the Chœur juif de France, creator of the Polyphonies hébraïques de Strasbourg and of the Ensemble Vocal Hébraïca, Hector Sabo published, in March 2020, with Beauchesne Editions , a book called Voix hébraïques : Un voyage dans la musique juive d’Occident, accompagné d’analyses et d’exemples musicaux.

This 352-page book takes us on a chronological circuit through 30 works of Jewish music, from the Middle Ages up to today, from Obadiah the Proselyte to Arnold Schoenberg or Michaël Levinas. The peculiarity of this book is that it offers a deep analysis of these works resituated in their historical context. A huge project which could have only come from a performer of Hebrew music who knows the music analysis.

The analysis of the works (nearly 200 pages) proove the author’s knowledge of the music language of each piece. One downside though : the analysis of each work features most of the time just the first page of the music score. To see them in their entirety, one will have to purchase them on the website Editions Beauchesne… when they will be available. The audio samples are mostly available on the European Institute of Jewish Music’s website, in particular through the serie of 39 radio programs Ledor Vador produced by Hector Sabo on Radio Judaïca Strasbourg between 2017 and 2018.

The virtues of the book are at the same time its flaws. By wishing to talk about this huge subject, the author leaves us dissatisfied. Certain aspects of Jewish music are too quickly mentioned. One will regret that the historical part of the book is only 100 page long (for 200 pages of analysis) and contains a few mistakes or imprecisions. Also, the structure of the book, mainly constituted of a historical part and an analytical part, forces the reader to go back and forth between these two parts. This « navigation », normal for a website, becomes a pitfall for this kind of medium. One will say that anyone can thus choose what he wants, depending on his knowledge. True, but it makes this book seem like a crossover object, and finally the exact opposite of its title, which presents a work of music analysis, with music examples, offering a journey through Western Jewish music.

To conclude, this book Voix hébraïques by Hector Sabo is strongly linked to the author’s life and his undeniable experience of masterworks of the Hebrew music repertoire. It features nice discoveries of works and composers, mainly from the 19th century to today. But the reader will have to jump, depending on what he looks for, certain technical parts, or on the contrary complete them by reading specialized books.