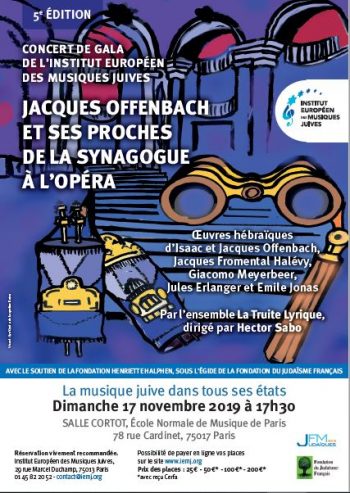 From the synagogue à l’opéra : Jacques Offenbach and friends

By the Truite Lyrique  Ensemble conducted by Hector Sabo

Few music lovers know that Jacques Offenbach, called by Rossini “the Mozart of the Champs Elysées”, drew some of his musical inspiration upon the synagogue chanting he learned as a child from his father Isaac Offenbach (1779-1850), musician, cantor and composer of religious music in the Cologne synagogue, in Germany. At the time of his arrival in Paris in 1833, and throughout his career, Jacques Offenbach (1819-1880) collaborated with other composers, who, like he, evolved from sacred synagogue music to high level lyrical art, that overtook the Parisian scene of the 19th century.

On the occasion of the bicentenary of birth of Jacques Offenbach, the 5th edition of the European Institute of Jewish Music’s Gala Concert, which will take place salle Cortot (Paris), on the 17th of November 2019 at 17h30, will present an original program entitled : « From the synagogue to the opera : Jacques Offenbach and friends ». One will hear several synagogal chorals by Jacques and Isaac Offenbach, as well as original or misknowned Hebrew works by composers friends with him, such as Jacques Fromental Halévy (Parisian creation by De profundis / Mimaamakim commissioned in 1820 by Louis XVIII for the death of his nephew the Duke of Berry), Giacomo Meyerbeer, Jules Erlanger or Émile Jonas.

From the synagogue’s podium to the stage of the opera or operette, from synagogal chants to lyrical and light music, there is often only one dance step…

Concert followed by a glass of friendship with the artists (only for the silver and golden tickets).

Buy your tickets on the online shop

You can also support the European Institute of Jewish Music wit an online donation. (A Cerfa receipt will be delivered).

Watch video excerpts of the concert